Phillips wins Showdown for $12,000 at Jetmore 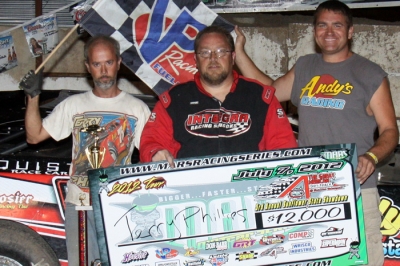 Terry Phillips and his crew celebrate his $12,000 victory. (Ron Mitchell)

Leading the final 39 laps at the Great American Dirt Track, the 46-year-old driver from Springfield, Mo., grabbed the $12,000 winner’s purse with his victory in the Showdown, a special event sanctioned by the MARS DIRTcar Series and Championship Late Model Association DIRTcar tour. | Video | Slideshow

After finishing second in Friday’s tuneup race to Jesse Stovall of Galena, Mo., Phillips quickly rallied from his ninth starting spot Saturday and raced to the front at the 3/8-mile oval.

“We were trying some stuff the last couple of nights there in practice, and all I did was mess it up (Friday). So we just went back to basics and the car was good tonight. Everything kind of came together for us,” said Phillips, who had won five of his last seven Late Model starts. “We ran the top of the track, while it had some moisture in it. I knew I had to get going.

Sixth-starting Tony Jackson Jr. of Lebanon, Mo., finished a distance second while Ricky Thornton Jr. of Chandler, Ariz., was third. Former Showdown winner John Anderson of Omaha, Neb., and Morgan Bagley of Longview, Texas, rounded out the top five. Stovall had an early flat tire and tangle that knocked him from contention, but he came back to finish eighth in the 50-lap main event.

At the outset, outside front-row starter Eric Turner of Springfield, Mo., edged ahead to lead the first lap before polesitter Gary Christian of Broken Bow, Okla., took control. Phillips quickly jetted into the top five after just one lap.

Christian was out front when a few early cautions slowed the action, first for a turn-four spin for a backmarker, then for the Stovall-Clay Daly tangle at the turn two exit.

On the restart, Phillips jumped to the high side in the fourth position and began clicking off positions. He took the third spot from Jackson, then grabbed second from Turner. He began reeling in Christian, who had reached lapped traffic after 10 laps.

Christian began showing smoke and losing positions before the halfway point, and he eventually dropped out with a 21st-place finish, but Phillips motored on. Jackson kept him from making it a runaway, staying within striking distance as the frontrunners worked through lapped traffic near the lap-40 mark.

But when Phillips maneuvered his way through the slower cars faster than Jackson, it was all over as he wrapped up the five-figure payday in a race where the final 32 laps went caution-free.

“I felt like we might of had something for Terry there and got into lapped cars," Jackson said, "but lapped cars are part of the race, so what do you do?”