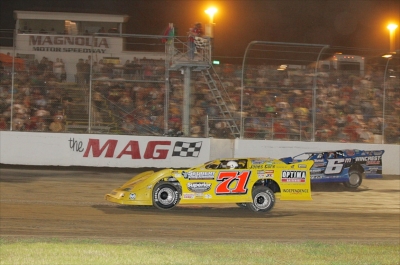 The ninth-starting O'Neal took the lead from Wendell Wallace of Batesville, Ark., on lap 20 at Magnolia Motor Speedway, then outran Scott Bloomquist of Mooresburg, Tenn., the rest of the way in lapping all but three competitors. | Slideshow | Video | Prelims

Bloomquist settled for second followed by Scott Dedwylder of Vosburg, Miss. Earl Pearson Jr. of Jacksonville, Fla., rallied from 19th to finish fourth while Mike Marlar of Winfield, Tenn., rounded out the top five in one of Mississippi’s richest Dirt Late Model events. Just two cautions, both in the first seven laps, slowed the 100-lapper.

"The car was terrific, to get the win here in Jay Dickens' home area is special, he does such a great job with our engine program, thanks to all my crew,” said O’Neal, who turns 48 on Tuesday. "I don't what to say! We struggled a little bit in qualifying and in the heat race, we worked all night long and we went out to hot lap tonight, I knew we going to have a good car.”

"Wendell was good early, but he got out of the groove there one lap and I was able to get by him. I decided I was going to run the bottom, I tried the top there a lap or two and that wasn't a good choice, so I got right back there on the bottom, when you lap people like (Jimmy) Owens and (Billy) Moyer, it doesn't happen very often, it's just a tribute to the team: Tader Masters, Cody Mahoney, and tonight we had Mike Price with us. They make my job easy.”

Wallace jumped to lead at the start, passing both Bloomquist and Moyer on the opening circuit. O'Neal got things going early on as he sped from the inside of the fifth row to second place by lap five. O'Neal then patiently waited behind Wallace and jumped on the opportunity to take the lead on lap 20.

Bloomquist, who had dropped back to sixth at one point in the race after starting from the pole, rebounded nicely and marched back towards the front, taking the second spot just one lap after O'Neal had taken the lead. O'Neal and Bloomquist then raced in heavy traffic for a long period during the race as both drivers were lapping cars at a staggering rate.

Bloomquist closed in on O'Neal several times in the last half of the race, but O'Neal had the answer each time. Once Bloomquist got close, he would open up his lead over the two-time series champion. O’Neal’s victory moved him into a tie with Bloomquist for second place in series points behind Owens.