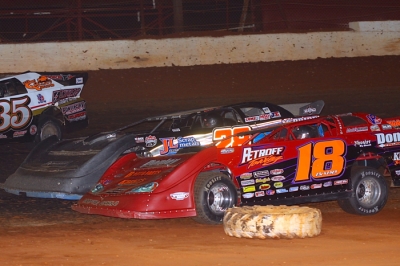 The second-starting Erb led the entire distance of the 40-lap race, earning $7,500 for capturing the 21st of 29 events for the month-long series. The victory ended Erb’s Summernationals winless streak exactly one day before it reached two years in length and gave him his first overall victory in more than two months.

“This feels real good,” said Erb, who struggled through the first half of the Summernationals tour before improving both his performance and consistency in recent events. “We just haven’t had a real good month. We’ve had some good runs, so we’re just trying to string some good runs together here at the end and make this car a little better.”

Babb, the reigning champion on the month-long series, pulled even with Erb a number of times in traffic, but settled for the runner-up finish ahead of points leader Brian Shirley of Chatham, Ill., who advanced from 13th to third after surviving an opening-lap tangle. Tanner English of Benton, Ky., held off his father Terry in a close finish for the fourth position.

After the first two attempts to start the race were spoiled by pileups, Erb jumped ahead of Babb on the race’s third start and cruised through most of the first half of the race. He pulled to a comfortable lead before the race’s only other caution waved with 15 laps complete.

Erb didn’t enjoy nearly as much comfort following the restart with Babb using the quarter-mile oval’s low groove to stay just behind the leader. Babb turned up the pressure even more when the two leaders reached lapped traffic around lap 30, pulling alongside Erb a number of times amid the slower cars.

With Babb showing his nose on the low side, Erb was tempted to drop down from the middle groove he ran for nearly the entire race.

“I was trying to hold my line cause we were running pretty good up there,” Erb said. “I seen him sticking his nose underneath there, but I was really worried about the lapped cars there at the end.”

Erb never had much trouble making his way through the traffic. Instead, it was Babb who struggled to negotiate around the slower cars. Each of his strong runs under Erb was stemmed when he got caught behind slower machines.

“We were pretty close there,” said Babb, who earned his 16th top-five finish on this year’s tour. “I had him pinched in three times and he got out of it every time.”

The race’s most serious accident came on the second attempted start when contact sent fast-qualifier Charles Zimmerman of Cunningham, Tenn., spinning in turn one. Nine cars ended up stopped between turns one and two once the dust cleared, but only hometown driver Carnell Parker III suffered significant damage. He pitted and rejoined the tail of the field.

The lap-15 caution occurred when Zimmerman got into the back of Jason Feger of Bloomington, Ill., at the end of the front straightaway, sending both cars spinning and collecting Derek Chandler of Pontiac, Ill.

After his suspension woes in his heat race, Ryan Unzicker will use a Summernationals series provisional to start the main event. Jerry Lierly will use the other series provisional while Jeff Walston will use the UMP national points provisional and Chris Shelton will use the track provisional. ... Set to start the feature from the outside pole, Dennis Erb Jr. hopes to beat polesitter Shannon Babb to turn one on the first lap. But if he doesn’t, he’s confident he can make the high side work well enough to roll around Babb later in the race. “We’ve been good here before, rolling the top through the middle (of the corners). If it blows off some I think we’ll be OK.” … In making setup changes for tonight’s feature, polesitter Shannon Babb is keeping in mind last year’s race at Clarksville when his car became loose late in the race, allowing Wendell Wallace to overtake him for the victory. “I keep thinking back to that, and I’m telling myself I don’t want that to happen again,” Babb said. “So I definitely won’t make those same adjustments tonight.” … Starting seventh, Jason McBride is hoping to call on his extensive experience at Clarksville. He’ll look to stay glued to the bottom of the track and move up as others falter. “I think we’ll be good if I can just stay right around the bottom,” said McBride a former track regular at Clarksville. “A lot of guys forget that you can’t run it hard off into the corners here, and you can pick off a few if you just keep parking it on the bottom.” ... Reigning series champion Shannon Babb will start from the pole of tonight's 40-lap main event after a redraw among heat race winners. Dennis Erb Jr. will join Babb on the front row with the father-son duo of Terry and Tanner English sharing row two. ... Ryan Unzicker’s early departure from the fourth heat race was caused by a broken lift arm under his race car. His crew is working to repair the issue in time for the B-main. … After going from challenging for second to sixth in a lap during his heat race Jason Feger was more than a little frustrated with the locked-down track conditions at Clarksville. “That’s just racing at Clarksville,” said Feger, who attempt to move from fourth to second when Charles Zimmerman and Brandon Sheppard slowed. “If you’re gonna try to go around someone on the top, you better hope you can get back to the bottom real soon. I tried and it didn’t work out for me.”

Polesitter Caleb Ashby led every lap of the 12-lap B-main, earning a feature starting spot with his straightaway victory in the caution-free race. Jason Feger rallied from mid-pack to take second in the first half of the race, then held of a late challenge from Clayton Miller to grab the race's other feature transfer.

Grabbing the lead when polesitter Ryan Unzicker pulled to the infield on the second lap, Terry English cruised the remaining distance of the fourth and final heat, winning by nearly a straightaway over runner-up Dillan White. Rodney Melvin pressured White for second nearly the entire distance, but couldn't get a strong enough run on the high side to take the spot. He settled for third with Nick Bartels finishing fourth to also earn a feature starting spot.

Polesitter Tanner English survived constant pressure from second-starting Jason McBride to lead every lap of the caution-free third heat. McBride looked under English multiple times, but settled for second ahead of Derek Chandler. Mitchell Lingauer grabbed the fourth and final transfer spot after Levi Ashby and Kyle Beard both pulled to the infield while holding the position.

Polesitter Dennis Erb Jr. grabbed the lead on the start and never looked back, cruising to a flag-to-flag victory in another caution-free race. Carnell Parker gave chase to Erb early, but faded late in settling for second. The race's only close battle was for the third spot, where Mike Spatola held off Jason Riggs. The top four finishers transfer to the main event.

Third-starting Shannon Babb took the lead when polesitter Charles Zimmerman got sideways on the back straightaway on lap two and led the remaining distance of the caution-free 10-lapper. Zimmerman beat fellow front-row starter Brandon Sheppard in a race to get to the bottom of turn one on the opening lap, but nearly lost control of his car exiting turn two the following lap. Babb streaked by and Zimmerman again nearly spun in turn three, but corrected in time to remain second, where he finished the race. Brandon Sheppard nearly stopped to avoid Zimmerman's turn-three spin, and settled for third at the finish. Points leader Brian Shirley took the fourth and final transfer position. Jason Feger briefly challenged for second, jumping to the high side when Zimmerman and Sheppard slowed on lap two. But he couldn't beat Zimmerman to turn one and got freight-trained back to sixth.

Zimmerman, who's racing for the first time after a six-week break, surprised even himself with the fast lap.

"I saw who was in my group, and I was just like 'man, it's gonna be tough just to make the show against those guys,'" said Zimmerman, who'll soon lead Brandon Sheppard, Shannon Babb, Brian Shirley and Jason Feger to the green in the first heat race. "It'll be tough to keep 'em behind me, but I'm gonna do my best."

Each 10-lap heat race will transfer the top four finishers to tonight's 40-lap main event with two B-main transfers and four provisional starters making up the remainder of the 22-car field.

Riding the momentum of two consecutive victories, Brian Shirley of Chatham, Ill., leads the series standings with 1,379 points to reigning champion Shannon Babb’s 1,340 points. Jason Feger (1,232) is third follow by Brandon Sheppard (1,192) and Ryan Unzicker (1,078). … Tonight will be full of firsts for Kyle Beard. The Trumann, Ark., driver is not only making his first appearance for Toone, Tenn.-based Upton Motorsports, but also making his first visit to Clarksville and competing in his first UMP-sanctioned event. “It’s going to be different for sure,” the 26-year-old driver said. “It’d be nice to get up there and race for the win, but I’ll be happy with just a top 10 or maybe a top five.” … Multi-time UMP Late Model national champion Rodney Melvin of Benton, Ill., is driving a Rayburn Race Car for tonight's race. He usually pilots a Pierce Race Car. ... One night after making her first Summernationals feature lineup Friday at Quincy (Ill.) Raceway, Kathy Jarvis of Park City, Utah, is taking a night off from the tour. She left Quincy planning to make a stop at car builder C.J. Rayburn’s race shop for repairs to her race car before rejoining the tour for Sunday’s race at Tri-State Speedway in Haubstadt, Ind. … As expected, Jon Henry of Ada, Ohio, is skipping tonight’s action at Clarksville, missing his first event on this year’s tour. Henry announced earlier in the week that he planned to head home for the weekend in order to regroup for the tour’s final five races next week. Derek Chandler of Pontiac, Ill., is back at Clarksville for the first since running the full Summernationals tour in 2010, where he won his heat race and grabbed a top-10 finish. … Wendell Wallace of Batesville, Ark., scored a $10,000 victory in last year’s Summernationals race at Clarksville, but isn’t competing in tonight’s event. ... Two Crate Late Models are among the 32 entries for tonight's event.