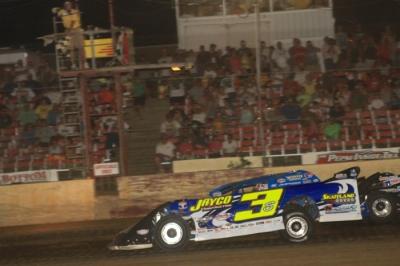 The polesitting Shirley edged Sheppard of New Berlin, Ill., in a side-by-side battle through the race’s first three laps, then pulled away after three early restarts.

Sheppard trailed a few lengths behind Shirley through the first half of the 40-lap race before lightning near the track knocked out all but emergency lights on the front straightaway just after the field reached the halfway mark.

After a nearly 20-minute delay, Shirley again pulled away from Sheppard and cruised as the second half of the race ran caution free. He crossed the finish line nearly a straightaway ahead of Sheppard to earn his fifth victory on this year’s tour and second in as many nights.

“I think everybody had the same tires on, so I knew when we had that (delay) that all I needed to do was just keep the momentum on both ends the best I could,” said Shirley who also won the tour’s race Thursday night at Macon (Ill.) Speedway. “I knew we had a pretty good race car.”

Shirley’s victory continues his solid season overall and his emergence as the favorite to claim the $25,000 Summernationals championship.

The runner-up effort was Sheppard’s fourth consecutive top-five finish on the series, but he felt he could have scored the win if not for a poor tire choice.

“I think our car was pretty close. If we would have made the right tire choice I think we could have rolled him on the outside, but we didn’t,” Sheppard said.

Notes: Shirley’s Pierce Race Car has a a Pro Power Engine and is sponsored by Jayco Construction, Skateland South, Allstar Performance, Kim’s Auto Body, and JFR Graphics. … Rain moved into the area just after the Late Model feature, washing out the remaining support division features. … The race’s first caution appeared three laps in when Jason Papich made contact with an infield tire, pushing it out onto the racing surface. … The race’s other two caution were for single-car spins on laps nine and 11. … The Summernationals tour moves to Clarksville (Tenn.) Speedway Saturday night for another $7,500-to-win event.

Looking for his second victory in as many nights, points leader Brian Shirley will start from the pole of tonight's main event after a redraw among heat race winners. Brandon Sheppard will join Shirley on the front row with Ryan Unzicker and Shannon Babb sharing row two. ... Kathy Jarvis will use one of two Summernationals series provisional to make her first series main event. Jason Papich will use the other series provisional while Justin Reid will use the track provisional and Mike Hammerle the UMP national points provisional.

Mike Spatola jumped ahead of polesitter Jim Moon on the start of the 10-lap B-main and led all the way to earn a feature starting spot. Moon held second the entire distance to grab the second feature transfer. The first of four cautions appeared on the second lap when Tony Toste got into the back of Justin Reed in turn two, sending both cars spinning. Michael Long went over the banking in tour one on the restart to bring out the second yellow flag, while spins by Denny Woodworth and Reid caused the third and fourth cautions.

Second-starting Shannon Babb survived repeated challenges from polesitter Dennis Erb Jr. in the fourth and final heat, pulling ahead on a final lap to win by less than a car length. Erb ran door to door with the high-running Babb for the majority of the race, but settled for second after pushing off of turn four coming to the white flag. Duke Whiseant ran with the two leaders early, but faded late in finishing third. Rickey Frankel claimed the fourth and final transfer position.

Second-starting Brandon Sheppard roared around polesitter Clint Kirkham in turns three and four on the opening lap and earned the prelim victory after turning back Jason Feger on a late-race restart. Feger trailed just behind Sheppard for nearly the entire distance, but couldn’t capitalize on the race’s only restart with two laps remaining. He settled for second with Jason Rauen just behind in third. Kirkham slid back to fourth at the finish and will join the top three in making the feature lineup. The lap-eight caution was caused by a tangle between Tony Toste and Dustin Griffin.

Polesitter Ryan Unzicker outdueled fellow front-row starter Mark Burgtorf on the opening lap and pulled away on a pair of mid-race restarts on his way to a convincing victory. Burgtorf held second the entire distance with Jerry Lierly just behind him at the finish. Jason Perry recovered from a lap-six accident to overtake Mike Spatola for the fourth and final transfer spot on the final lap. The race was slowed with six laps complete when Chuck Mitchell and Perry tangled and the end of the front straightaway. The momentum of the two cars carried both over the turn-one banking. Mitchell backed hard into the concrete barriers outside the track while Perry stopped his car just in time to avoid contact. Mitchell was OK, but it took safety crews nearly 15 minutes to get his car towed to the pit area. A second caution waved on lap seven when Matt Furman got too high in turns one and two and spun to avoid going over the banking.

Leading every lap from the pole, fast qualifier Brian Shirley pulled to more than a straightaway advantage for a convincing victory in the caution-free 10-lapper. Third-starting Jason McBride slid up in front of outside polesitter Jon Henry on the race’s opening lap and held off Henry and Nick Bartels to finish second. Henry pressured McBride the entire distance, but couldn’t find a way around in settling for third. Bartels was fourth and will join the top three finishers in transferring to the main event. Two attempted starts were waved off before the third start stuck.

Shirley’s time was the only the only lap under 14 seconds and earns him the pole for one of four heat races coming up. Other heat race polesitters after group qualifying: Ryan Unzicker of El Paso, Ill.; Clint Kirkham of Camden, Ill.; and Dennis Erb Jr. of Carpentersville, Ill.

Each 10-lap heat race will transfer the top four finishers to tonight’s main event while B-main transfers and provisional starters will make up the remainder of the 22-car field.