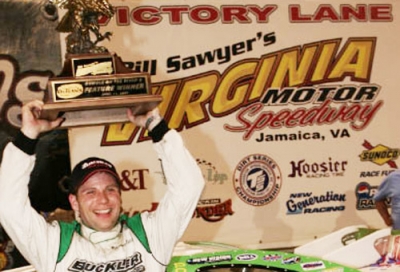 SALUDA, Va. (April 12) — Entering the 2008 season, Jeremy Miller was considered by most observers to be the regional driver most likely to become a first-time World of Outlaws Late Model Series feature winner. And why not? Last year the 37-year-old from Gettysburg, Pa., showed repeatedly that he was on the verge of breaking through on the national tour. He led WoO events at Virginia Motor Speedway and the Dirt Track @ Lowe’s Motor Speedway until mechanical trouble sidelined him. He lost a July race at Ohio’s Sharon Speedway to series star Chub Frank after an ill-timed caution flag late in the distance wiped out his healthy lead. He also finished a career-high second at Bedford (Pa.) Speedway, nearly stealing the top spot from Frank in the closing laps. | Car owner Charles Buckler | VMS race story

All those near-misses steeled him for his full-bore assault on a 2008 WoO victory, which he secured for car owners Charles and Genny Buckler in his tour season debut on Saturday night at the half-mile Virginia Motor Speedway. Miller brought a focused outlook to VMS, where he ran a brand-new Bullock-powered Rocket car that he and his crew worked overtime to prepare just right during the off-season.

“Maybe if we would’ve won one of the (WoO) races we could have last year, it would’ve come too easy,” Miller said when asked if he felt he had to lose some tour events before he could finally win one. “Those disappointments we had last year were a big reason why we really worked hard over the winter. We paid attention to a lot of little details, and hopefully that paid off tonight.”

Miller’s mind was so clear on Saturday night, he didn’t even worry about bad luck striking him again as he led the closing stages of the 50-lapper at VMS. “That (misfortune) was last year,” said Miller. “A lot of people said, ‘You gotta let it go,’ so when I got the lead I really was just concentrating on trying to run a smooth line — and that was the best thing for me. It was getting a little rough in (turns) one and two, and when I slowed down to run smoother, I was actually going faster.”

When Miller reached victory lane for a raucous celebration with his team, family and friends, he felt a sense of accomplishment. “I feel like last year we had so many chances to make people (who support him) happy, but instead we came out disappointed because we ended up a victim of circumstance,” said Miller. “So I just wanted to make all them people happy this year, and I think we did.”

With the Rumble on the River IV the second WoO event of 2008 running under an open tire rule, some intrigue developed on the rubber front. Miller and runner-up Steve Francis both used American Racer tires, as did Chub Frank, who finished eighth but ran in the top five before a slide sideways in turn four on lap 14 forced him to restart at the rear of the field sans his car’s hood.

Moyer, meanwhile, had his car shod with Hoosiers and was surprised to learn that his tussle up front with Miller and Francis was actually a study of tire manufacturer contrasts. “I didn’t know (Miller) was on American Racers until after they told me, so there was two of them ganged up on me,” Moyer said of Miller and Francis. “They were on different rubber than me — and sometimes that can make you feel better in your mind about how you ran. With the tire war going on, I was the first Hoosier car by a long ways, so that makes me feel good.”

Nowhere to go for Richards

Josh Richards saw his hopes for a good finish flash in front of his face on lap 14. “When I saw Chub (Frank) spun in front of me I was like, ‘Oh, no,’” said Richards. “(Shane) Clanton and I were racing side-by-side, and by time I got to the corner Chub was sitting there spun out and there was nowhere to go. My right-rear tire bounced up over his nose.”

Fortunately for Richards, he escaped the encounter virtually unscathed (“It might have bent my J-bar,” he said) and marched on to a third-place finish that kept him second in the WoO points standings. He closed within 12 points of Moyer.

“The car was actually really good,” said Richards, who registered his career-best finish at VMS. “But about a third of the way into the race it picked up a real bad stumble, so I couldn’t be smooth through the middle of the corner. I ended up losing a lot of time every lap unless I hit it exactly perfect, which was almost impossible to do.”

Shane Clanton continued to climb back into the WoO title race after suffering DNFs in the season’s first two events. His fifth-place finish at VMS moved him to a ’08-high ninth in the points standings. ... With Moyer finishing 17th and Darrell Lanigan placing 12th at VMS, there are now no drivers with a top-10 finish in all WoO features this season. ... Shannon Babb and his Bowyer Dirt Motorsports crew found themselves scrambling to repair their No. 18 after the Illinois driver slapped the outside wall between turns three and four during his heat. He skipped the consolation race and used a provisional to get in the headliner, which he started moments after completing a hasty patch job on the suspension and other problems resulting from his trip into the guardrail. ... Second-year WoO traveler Brian Shirley’s early-season frustration continued at VMS. He started ninth but slid backward before a lap-21 scrape sent him spinning in turn four and, a couple circuits later, out of the race with damage to the right-rear corner of his Petroff Towing machine. He was saddled with his second 24th-place (last) finish in the last three WoO events. ... Tim Fuller had his hot-lap session curtailed by an ignition problem, but after changing his Gypsum Express car’s distributor cap, plug wires and MSD box he managed to score his first top-10 finish of the season (ninth). ... WoO competitors roll back into action this week with the Showdown in Sarvertown on Tuesday, April 15, at Lernerville Speedway in Sarver, Pa., and the Circle K Colossal 100 on April 18-19 at The Dirt Track @ Lowe’s Motor Speedway in Concord, N.C.