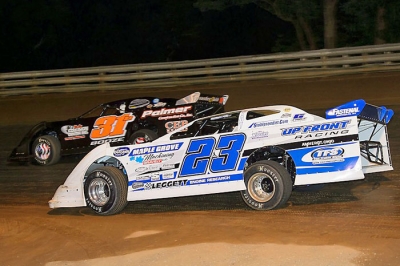 Gary Stuhler sizes up Brian Booze (31B) before his winning pass. (wrtspeedwerx.com)

Gary Stuhler of Greencastle, Pa., is the winningest Late Model driver in Hagerstown (Md.) Speedway history, and his record will be that much tougher to break after he eked out his 130th victory Saturday.

Stuhler led less than 50 yards of the 25-mile Johnny Roberts Memorial on June 30 to edge Brian Booze of Marion, Pa., for his first Hagerstown victory since April 9, 2011.

“It’s gets tougher every year,” Stuhler said. “Starting position means a lot. You can’t come from the back like you used to years ago. It’s a tough deal anymore. Fortunately I have a lot good people and sponsors to put a good deal together. It feels good to be back in victory lane again.”

In winning the Johnny Roberts Memorial for the seventh time, Stuhler started seventh, moved into third on lap 33 and stole the victory from Booze exiting the final corner.

“I could get to him, but I got to him that one time and he closed the door on me going into (turn) three and I got a little loose and lost a lot of time,” Stuhler said. ”I didn’t know if I’d have enough time to get back to him but I thought if I could stay close enough, he was trying to protect the bottom a little bit and I thought if I could pace myself, I’d try that last lap on the outside and see if it worked. Luckily everything worked out.”

On the final lap, Stuhler was glued to Booze’s rear deck and looking inside on the backstretch before he suddenly charged around the outside to exit the final turn side by side to squirt ahead just before the checkers.

“I used up too much on the last lap,” Booze said. “He shot by me so fast on the front straightaway, we came up about 30-40 yards too short, I guess. I can’t hang my hat about being beat by Gary Stuhler. Gary has been doing this forever. I can remember playing under the grandstand and watching him win races. He’s a Hall of Famer for a reason. We’ll get one soon. The car’s been good.”

• Undefeated since the track reopened, Gene Ross of Lake Park, Ga., won his fourth straight feature at Needmore Speedway in Norman Park, Ga. The track posted a $500 bounty on him before his June 30 victory.

• Dan Shelliam’s July 1 victory at Dubuque (Iowa) Speedway came under the bright lights of the new $75,000 Musco lighting system at the 44-year-old oval.

• It was a family affair on June 29 at Hartford (Mich.) Motor Speedway with Phil Ausra, Doug Ausra and Steve Ausra sweeping the top three spots in the Late Model feature.

• Not only did Brad Authier of Chatham, Ontarion, win his third straight feature at South Buxton Raceway, his counterparts in three other divisions also posted their third straight victories.

• Benefitting when frontrunners fell by the wayside, Travis Fultz of Harrogate, Tenn., picked up a $3,000 victory June 30 at Tazewell (Tenn.) Speedway. Steve Smith’s car overheated while he was running second and leader Jason Trammell also exited with mechanical woes.

UMP DIRTcar (Crate Late Models): Mark Oller of Highland, Ill. is on top in races through July 1 with 1,328 points. He holds a 10-point margin on Clayton Miller of Elkton, Ky.

WDLMA: Rick Scheffler of Waukesha, Wis., has 208 points through June 23 to lead his brother Russ Scheffler, a seven-race winner who has 206 points. Tim Buhler of Glenbuelah, Wis., drops to third with 205 points.

NeSmith Chevrolet Series: Mickey Trosclair of Luling, La., maintained his points lead with his 16th victory in points through July 2. He has 754 points to lead Brent Barrett (714) of Cleveland, Miss., and Shannon Lee (703) of Lumberton, Miss., with the Crate Late Model organization.

Thunder Valley Raceway, Central City, Pa. (July 6): In a rare Friday event, Late Models will gun for a $2,000-to-win purse in the 30-lap Willie Will Tribute. Semi-Late Models will also be in action.