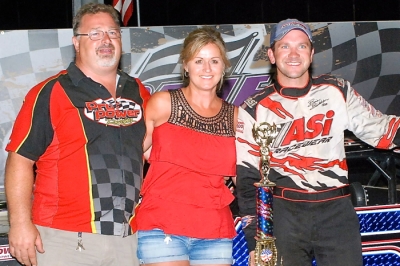 Birkhofer started from the pole in the 40-lap race and pulled ahead of second-starting Brian Shirley of Chatham, Ill., on the race’s initial start. He easily pulled away following two restarts in the first half of the race and cruised through lapped traffic.

The race’s final restart on lap 26 gave the eighth-starting Heckenast a chance to challenge for the lead, but Birkhofer turned back each of his challenges before pulling away late in the race.

Birkhofer cruised through the final five laps, crossing the finish line a second a half ahead of Heckenast to earn his second victory in his past three Summernationals appearances.

“It’s been a good three nights. We’ve definitely got some stuff to feel positive about,” said Birkhofer, who was winless on the season before winning the tour’s event Friday at Paducah (Ky.) International Raceway. “I knew (Heckenast) was different on tires than we were ... If he was good enough to get by me, he was gonna do it. I just tried to play defense some and try to hit my marks.”

Heckenast settled for the runner-up finish, earning his first top five on this year’s tour while Brandon Sheppard of New Berlin, Ill. finished third to post his sixth top five in the tour’s past eight races. Ryan Unzicker of El Paso, Ill., advanced from his 11th starting spot to finish fourth while Jason Feger of Bloomington, Ill., finished fifth after running as high as third.

Using the high side of the racetrack, Heckenast charged to third in the race’s first five laps. His strongest challenge for the lead came on lap 33 when he dove under Birkhofer entering turn one. He hoped the move would entice Birkhofer to move down the racetrack, but Birkhofer instead pulled away.

“I took a chance and hauled it in on the bottom to show him I was there so he’d move down and I could get a run on the top. But he moved down and got better," said Heckenast, who's still looking for his first Summernationals victory. "I was just happy to drive to the front. I don’t know, maybe we’ll one of these things one day.”

Shirley, who entered the race with a 41-point lead in the series standings, ran second until a brush with the wall on lap 16 sent his car spinning up the track at the end of the back straightaway and slamming into the water barriers that block the concrete wall along the track exit. The barriers exploded upon impact, but did their job by protecting Shirley from injury.

Shirley drove to the pit area while track crews went to work cleaning up the water that covered the entrance to turn three. The race was red-flagged for roughly 15 minutes for the cleanup, giving Shirley time to rejoin the race before the field went back green. He was later involved in lap-22 tangle with Richie Hendrick and Jerry Lierly that ended his night.

Jack Sullivan moved by Tim Isenberg midway through the 12-lap B-main and pulled away to earn the prelim victory and a feature starting spot. Isenberg faded late in the race, but held off a hard-charging Jason McBride to finish second and earn the race's other feature transfer.

Tony Toste led every lap of the C-main taking the win over Mark Burgtorf and Jason Papich in a race that transferred the top three finishers to the B-main.

Brian Birkhofer will start from the pole of tonight's 40-lap main event after a redraw among heat race winners. Points leader Brian Shirley will join Birkhofer on the front row while Brandon Sheppard and Jon Henry will share row two.

Leading only the final quarter-straightaway, second-starting Brandon Sheppard topped polesitter Frank Heckenast Jr. in a photo finish to win the final heat. Sheppard pressured Heckenast throughout the 10-lap race with the two drivers going side by side for multiple laps. A lap-seven caution gave Heckenast the lead to himself, but Sheppard dove hard into turn three on the final lap and pulled ahead of Heckenast at the finish. Dennis Erb Jr. survived an early tangle to finish third while Morgan Bagley took the fourth and final transfer spot. The race was slowed with three laps complete when Erb, Bret Sievert and John Poccatto tangled in the middle of turns one and two. The second caution waved on lap seven when Jason Papich spun from the fourth position.

Brian Shirley took the lead on the start and pulled away to nearly a straightaway lead in the caution-free race. Jason Feger topped outside polesitter Shannon Babb and Ryan Unzicker in a three-wide battle during the race's first two laps and held off Unzicker's late charge to finish second. The fifth-starting Unzicker pulled alongside Feger on the final lap, but came up just short in a photo finish. He settled for third while Babb slid back to fourth at the finish.

Taking advantage of Duke Whiseant's early departure, Jon Henry was moved from the fourth starting spot to the outside pole and led every lap of the second heat. Polesitter Jason Jaggers looked under Henry a few times late in the race, but settled for second at the finish. Rich Bell and Richie Hendrick were third and fourth to also grab feature transfers. Duke Whiseant started from the outside pole, but his car got sideways and then jerked up the racetrack in turn four on the opening lap. He avoided hitting the wall and drove to the pit area under caution. The race had trouble getting going with two starts being waved off before Whiseant's troubles on the third attempted start. Two more cautions slowed the pace, both caused by turn-two spins by Kathy Jarvis.

Polesitter Brian Birkhofer grabbed the lead on the start of the 10-lap race and raced to a convincing victory over runner-up Scott Schmitt. Ray Guss Jr. moved to third from the fifth starting spot, but couldn't find a way around Schmitt after closing late in the race. He settled for third while Jerry Lierly held off Tim Isenberg for the fourth and final transfer spot. The race was slowed before a lap was completed when Tony Toste's brush with the back straightaway wall left debris on the track. The caution again waved on lap six when Toste spun in turn one.

Shirley's lap earned him the pole for one of four heat races coming up. Other heat race polesitters after group qualifying: Brian Birkhofer of Muscatine, Iowa; Jason Jaggers of Wyanet, Ill.; and Frank Heckenast Jr. of Frankfort, Ill.

Each 10-lap heat race will transfer the top four finishers into tonight’s 40-lap main event while two consolation race transfers and four provisional starters will fill the remainder of the 22-car field.

The set of time trials ran relatively smoothly with Russ Adams of Princeville, Ill., being the only driver to have trouble. He got into turn one too hard on his first qualifying lap, backing his car into the wall. The caution waved and he pulled to the pit area.

Brian Shirley of Chatham, Ill., continues to lead reigning series champion Shannon Babb of Moweaqua, Ill., in the series points standings with 1,184 points to Babb’s 1,140. Jason Feger (1,059) remains third after winning last night’s race at Jacksonville (Ill.) Speedway followed by Brandon Sheppard (982) and Ryan Unzicker (878) ... Frank Heckenast Jr. of Frankfort, Ill., is back on the tour after missing his first race Tuesday night in order to head home and regroup, according to a crew member. Heckenast plans to run the majority of the tour’s remaining events. ... Jon Henry of Ada, Ohio, is planning to take a break from the tour following Friday’s race at Qunicy (Ill.) Speedway. Henry said he’d prefer to compete in every series race, but said skipping the tour’s trip to Clarksville (Tenn.) Speedway made more “geographical sense” for his race team. He plans to head home and regroup over the weekend before returning to the tour Tuesday at Florence (Ky.) Speedway for the final week. ... Two-time and reigning Deery Brothers Summer Series champion Ray Guss Jr. of Milan, Ill., is making his first appearance on this year’s tour tonight at La Salle. ... Duke Whiseant of Texarkana, Ark., is back on the tour tonight after making select starts early on the series. ... Bobby Pierce of Oakwood, Ill., is not entered in tonight's race, meaning he'll miss his first race on this year's tour.