Phillips rolls on with MARS victory at Monett 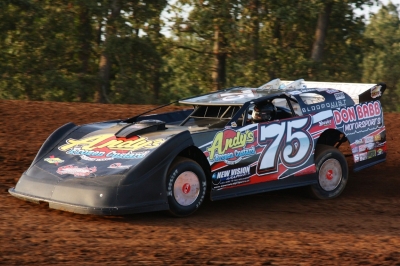 Terry Phillips warms up at Monett, where he earned Tuesday's $3,000 victory. (Ron Mitchell)

MONETT, Mo. (July 3) — Getting back on track midway through 2012 after a winless 2011 season, six-time series champion Terry Phillips grabbed his second MARS victory in three starts Tuesday at Monett Speedway.

Polesitter Justin Wells of Aurora, Mo., jumped into the early lead in the low groove, but Phillips worked the middle of the track in the early laps to work around Wells and grab the lead. He led the rest of the way at the 3/8-mile oval.

“We started out in the middle and it was a little dusty from everything being thrown off the bottom,” Phillips said. "I just kept working it, trying to clean the groove, and finally kind of got going and got by him.

"As soon as I got to the bottom, that was by far the faster line ... as the race went on, the track cleaned up and we really got good. We weren’t right on the money tonight, I don’t think, but later in the race we got better.

“We’re going to go home and tear this car apart and go over every little nut and bolt and try again. The car’s been rolling a lot better and getting the hang of things, and hopefully we’ll keep our roll going.”

Wells wasn’t around at the finish of the 30-lapper. Restarting side-by-side with Turner behind Phillips on a restart before the halfway point, Wells and Turner appeared to brush together just past the flagstand and Wells lost control, spinning into turn one as competitors scrambled to avoid him.

Among other cautions slowing the action: third-starting Chuck Comer spun exiting turn two on the second lap, and a lapped car spun virtually in front of the leaders before the Wells-Turner incident.