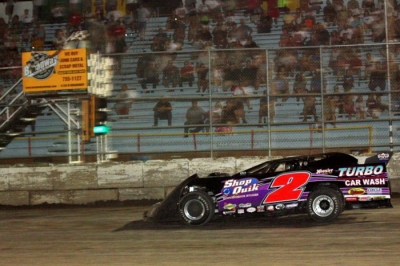 Chase Junghans takes the checkers at 81 Speedway. (in thedirtphoto.com)

The 19-year-old son of Greg Junghans, who fields Late Models for championship-winning driver John Anderson of Omaha, Neb., took the lead from Matt Johnson of Archie, Mo., midway through the feature and grabbed a victory.

“I have to thank my crew as the car ran perfect all night,” the younger Junghans said. “We were set up to run the bottom and I just took my time and waited for the opportunity to make my move.

"I kept telling my Dad I wanted to put a car together and finally I just started building one on my own. These cars are a lot of fun to drive, but I am not completely done driving my modified.”

Starting on the pole of the 25-lapper with Christian alongside, Johnson quickly used the top of the 3/8-mile oval to take the lead while the third-starting Junghans quickly dropped Christian to third.

Johnson maintained a three-length lead over Junghans, who was working the bottom of the track while Christian had his hands full with the fifth-starting Gorby.

The leaders reached lapped traffic after seven laps with Johnson followed by Junghans, Christian, Gorby, Smith, Tommy Weder Jr. and Clay Daly as those drivers battled throughout the caution-free feature.

On the 13th lap, Junghans drove low entering turns one and two and slid in front of Johnson to take the lead heading down the backstretch. The leader successfully handled lapped traffic the rest of the way in cruising to the victory.