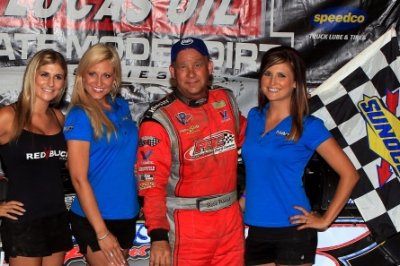 Steve Francis made his fourth 2012 visit to victory lane. (rdwphotos.smugmug.com)

Moran led the first 12 circuits before Francis found a way past. Blankenship moved up to challenge the leader the rest of the race, but Francis survived the onslaught amid lapped traffic over the final five laps for his ninth career series victory.

"Donnie and I started on the front row, it was reminiscent of the old days when we ran against each other all the time,” said Francis, driver of the Barry Wright Race Cars house car. "It was a real good win for Barry and the guys, we made the right tire choice tonight. My daughter was also here tonight, she doesn't get to come very often, so it was a special night all the way around.”

The track crew watered the racing surface during a break for Independence Day fireworks, and Francis kept a close eye on the situation.

"I thought O'Neal would give us a race with his tire choice,” Francis said, "but Blankenship has been running real good here lately so I knew he would be in the hunt as well.”

The 50-lapper was slowed by caution flags on lap 18 for Shane McLoughlin and on lap 28 for Doug Dodd.