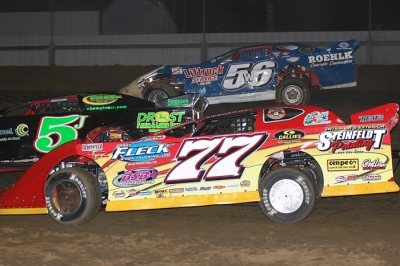 INDEPENDENCE, Iowa (July 2) — No more than a car-length separated Jeff Aikey of Waterloo, Iowa, and Ray Guss Jr. of Milan, Ill., for much of the 40-lapper, but that’s all Aikey needed when the checkers waved in the Deery Brothers Summer Series event at Independence Motor Speedway.

Aikey, who took charge two laps following a lap-10 restart, held off Guss in thrilling fashion to score his first series victory of the season on the IMCA tour, and his second straight at Independence. The tour's all-time winningest driver earned $2,525 as the series made its 25th visit to the half-mile oval.

The pole-starting Guss took the lead at the drop of the green as he raced away from fellow front-row starter Murphy. Aikey and Joe Zrostlik pursued, joining the leaders on the bottom side of the speedway before a caution on lap 10 slowed action.

When racing resumed, Aikey worked the top groove past Guss to steal the lead on lap 12. The pair then pulled away from the pack to battle for the top spot. While Aikey ran the top side, Guss ran down low, staying close to the leader and occasionally pulling alongside him.

The leaders swapped racing grooves when they encountered lapped traffic with 15 laps to go as Guss chased Aikey through the backmarkers. Aikey held the lead when the second and final caution occurred on lap 29.

On the restart, Aikey again took command with Guss close behind. Guss repeatedly worked the low groove in each set of turns, but was never able to get closer than the leader’s door as Aikey drove to the win. Murphy took advantage of the late restart to steal third from Tyler Bruening, who started in the seventh row.