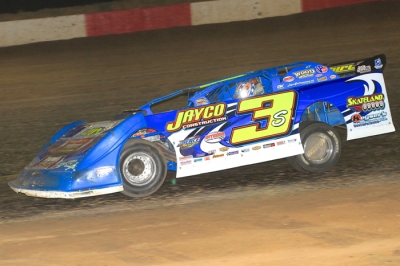 Starting from the pole, Shirley easily moved ahead of fellow front-row starter Shannon Babb of Moweaqua, Ill., on the start of the 40-lap race and quickly pulled to a straightaway lead while a struggling Babb held up would-be challengers on the locked-down racing surface.

After pressuring Babb through the first half of the caution-free race, third-starting Dennis Erb Jr. of Carpentersville, Ill., finally made a run strong enough to make the pass for second using the track's middle groove and set his sights on the leader. With Shirley battling heavy lapped traffic, Erb closed the gap considerably in the race's final five laps, but ran out of time as Shirley padded his points lead with his third victory on this year’s tour.

“It was nice for once (to be out front) when the track rubbered up,” said Shirley, who earlier in the night claimed his 13th heat race victory in 17 series events. “The biggest thing is putting ourselves up front and realizing what we need to do to capitalize on starting up front. … I feel like we’ve got more to prove, but things are definitely going our way right now.”

Erb, a three-time series champion, earned his best finish on this year’s tour with his runner-up effort while Babb survived heavy pressure from sixth-starting Scott James of Lawrenceburg, Ind., to hold on to third at the finish. Behind James, Billy Drake of Bloomington, Ill., was fifth to earn his second top-five finish in three appearances on this year’s tour.

Erb felt he had a car capable of winning the race if not for being stuck behind Babb for so long on the locked-down racing surface. He hoped for a late caution to give him a shot at challenging Shirley but in the end had to settle for second.

“Shannon wasn’t too good and he was holding me up a little bit,” Erb said of his battle with the reigning series champ. “Once I got by him we started running him down. But there isn’t much you can do on a racetrack like that. We just had to take what it was and come home second.”

Babb, who won last year’s Summernationals race at Peoria en route to his third series title, said the wrong setup choice was what hampered his efforts.

“I think I was holding (Erb) up, to be honest,” said Babb, who entered the race 29 points behind Shirley in the series standings. “I didn’t feel like I was sitting on my right-rear real good. I knew I was holding him up, and he just rolled me in three and four like I was stopped. … We definitely weren’t on the right setup.”

Notes: Shirley’s Pierce Race Car is powred by a Pro Power Engine and is sponsored by Jayco Construction, Skateland South, Allstar Performance, Kim’s Auto Body, and JFR Graphics. … The victory is Shirley’s third in three appearances this year at Peoria. … With the threat of thunderstorms and lightning flashing to the south of the track throughout the evening, officials were forced to skip planned track prep breaks in order to rush along the program. … The series moves to Jacksonville (Ill.) Speedway Tuesday for another $5,000-to-win event.

Bobby Pierce and Jason McBride will use series provisionals to start the main event while Steve Lance Jr. will use the track provisional.

Polesitter Brandon Sheppard dominated in the caution-plagued B-main, leading every lap of a race that was contested mostly around the track's bottom groove. Wes Steidinger held off Todd Bennett for second to also earn a feature starting spot.

Thunderstorms that started out well to the south of the track earlier this evening have crept closer and are threatening the program. As of 9:45 p.m., there has been nothing more than a few sprinkles, but the wind has picked up considerably and lightning is flashing close by.

Setting up a battle between the tour's top two championship contenders, Brian Shirley and Shannon Babb will start the feature first and second respectively after a redraw among heat race winners. Brian Diveley will start third with Dennis Erb Jr. fourth.

Polesitter Brian Shirley turned back Ryan Unzicker on a few early restarts and pulled away to a convincing during the second half of the race. Unzicker was second with Jack Sullivan third. Jason Jaggers was fourth and will join the top three in transferring to the main event. A complete restart was needed after a number of cars piled up in turn two on the opening lap. No one involved appeared to suffer significant damage. Kevin Weaver caused one of three early cautions when he tagged the wall and came to a stop on the back straightaway.

Polesitter Brian Divley outdueled Jason Feger on the opening lap and held off Kyle Logue's late challenge to score the victory. Logue used the bottom groove to move by Feger on lap three, but couldn't find a way around Divley after the race's only restart midway through. He settled for the runner-up finish ahead of Feger and Mike Spatola. The top four finishers transferred to the main event. Kellen Conover spun to bring out the only caution.

Polesitter Shannon Babb led every lap, grabbing a convincing victory over third-starting Scott James. Morgan Bagley finished third while Rusty Schlenk capitalized on Daniel Flessner's last-lap spin to grab fourth and also transfer to the main event. The race was slowed with one lap complete when the second-starting Flessner nearly spun in turn two, resulting in a four-car pileup behind him that left the cars of Todd Bennett and Tony Toste hooked together.

Staying glued in the racetrack's bottom groove, third-starting Dennis Erb Jr. rolled past front-row starters Billy Drake and Jon Henry and pulled away after the only restart midway through the 10-lap prelim. The polesitting Henry jumped to the high side and led the first few laps, but couldn't hold settle into a consistent groove He attempted moving down after losing the lead, but still let second-starting Drake slip by for second late in the race. Henry settled for third with minor right-rear sheetmetal damage from a brush with the wall with Scott Schmitt topping Brandon Sheppard for the fourth and final transfer spot.

Earning fast time honors for the second consecutive UMP DIRTcar Summernationals event, Jon Henry of Ada, Ohio was fastest of 41 qualifiers during Monday's time trials at Peoria Speedway with a lap of 12.799 seconds around the high-banked quarter-mile oval.

Henry, who also topped time trials during Saturday’s series race at Federated Raceway at I-55, will start from the pole of one of four 10-lap heat races coming up. Other heat race polesitters after group qualifying: Shannon Babb of Moweaqua, Ill.; Brian Divley of Springfield, Ill.; and points leader Brian Shirley of Chatham, Ill.

The top four finishers from each heat race transfer to tonight’s $5,000-to-win main event while two consolation race transfers and four provisional starters will make up the remainder of the 22-car field.

After 16 series events, Brian Shirley continues to lead the tour’s points standings with 1,034 points. Reigning series champion Shannon Babb (1,005) is second followed by Jason Feger (938), Brandon Sheppard (867) and Ryan Unzicker (782). … Tonight's entry list includes a number of drivers making their first appearance on this year's tour, including Jack Sullivan of Greenbrier, Ark., and Morgan Bagley of Longview, Texas. Both drivers made the trip over from Lernerville (Pa.) Speedway, where they competed in the World of Outlaws-sanctioned Firecracker 100 over the weekend. … Sullivan, a regular on the tour last year, scored one of his two Summernationals victories at Peoria in 2010. He plans to follow the tour through Wednesday’s race at La Salle (Ill.) Speedway, after which he’ll head to Wisconsin to join the World of Outlaws for the tour’s western swing opener Friday at Amsoil Speedway. … Making his series debut, Bagley plans to follow the tour through Thursday’s race at Macon (Ill.) Speedway before heading to the Great American Dirt Track in Jetmore, Kan., for the weekend’s Showdown event. … A number of drivers welcomed the off day on Sunday, which was due to high temperature forecasts that led officials to cancel the race at Lincoln (Ill.) Speedway. Shannon Babb was especially grateful because the cancelation gave him time to go back to his shop and repair the car he rolled during qualifying for Saturday’s race at Federated Raceway at I-55. Babb, who recovered to finish fifth in Saturday’s feature in a backup car, said the car lacks a bit more work, but should be back in action for tomorrow’s race at Jacksonville (Ill.) Speedway. … Scott James of Lawrenceburg, Ind., is excited to be back at Peoria after nearly winning last year’s Summernationals event at the track. James, last year’s points runner-up on the series, wanted to follow the month-long tour again this year, but has only been able to race selectively due to building a new house. Besides tonight, he plans to race at La Salle on Wednesday and Macon on Thursday. He’ll race in a non-series race at Farmer City Speedway Friday before heading back home to move into the new house over the weekend. ... Both Jason Feger and Mike Spatola arrived late to the track, missing hot laps.