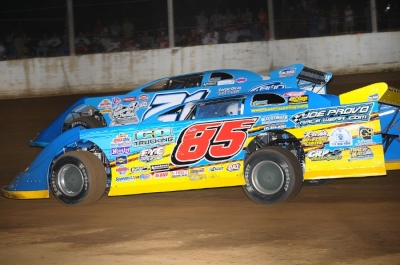 Kaanta earned $2,000 while ending the three-race win streak of polesitter A.J. Diemel of Navarino, Wis., who was caught up in a late-race tangle with Jake Redetzke of Eau Claire, Wis. | Slideshow

Scott Gilberts of Menomonie, Wis., who started on the second row with Kaanta, finished second while Lance Matthees of Winona, Minn., outside front-row starter Jordan Yaggy of Rochester, Minn., and 12th-starting Chad Mahder of Eau Claire, Wis., rounded out the top five.

The Diemel-Redetzke-Kaanta trio — which finished in the top three the previous two series races — was threatening to do it for a third time, but the Diemel-Redetzke collision forced Redetzke out, and Diemel was charged with the caution. That handed the lead to Kaanta, who ended a streak of three straight third-place finishes on the series with the victory.

Diemel and Yaggy shared the front row with Diemel taking the early lead over Gilberts and Kaanta as Yaggy slipped back to fourth ahead of Matthees.

After 16 laps, the top five runners were the same but Kaanta was second ahead of Gilberts with Matthees fourth and Yaggy fifth. By this time, Diemel had lapped five or six of the cars in the remaining field and was on his way to what appeared to be his fourth consecutive victory.

Just as lap seventeen was beginning, two successive caution flags were thrown, the only two of the feature. This dropped two cars out of contention, Todd Green with mechanical problems and Kerry Hanson when he sparked the frontstretch wall on a restart and then made heavy contact with the turn-one wall.

When racing resumed, Diemel once again shot to the lead followed by Kaanta, Gilberts, Matthees and Yaggy. Back in the field, though, Redetzke was on the move. Running seventh much of the race, he broke into the top five on lap 19 and was fourth two laps later.

With 10 laps remianing, the leaders began to run into lapped traffic and the field tightened up. Diemel was still in control, leading by as much as a full turn over Kaanta with Redetzke third ahead of Gilberts and Matthees. Diemel’s lead dwindled as Redetzke took second from Kaanta and closed the gap amid traffic.

By lap 35, Diemel was just a length ahead of Redetzke. As the cars passed under the flagstand for the beginning of lap thirty-six, Redetzke seized the opportunity and got alongside Diemel as the cars approached turn one. As both cars went for the same piece of real estate, they got together and the result wasn’t good for either as Redetzke’s car suffered damaged and Diemel was credited with the caution.

With Redetzke and Diemel out of the picture, that left Kaanta in charge to lead the final laps.