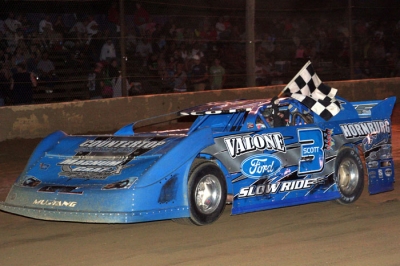 The drivers were connected once again Saturday at Stateline Speedway with Maloy honored upon his retirement and Scott honored in victory lane after his $5,000 victory in the Fritz Seamens Memorial. | Slideshow

Scott outdueled Dick Barton of Ashville, N.Y., in lapped traffic over the final laps in racing to victory while Barton, Andy Boozel, Greg Oakes and Scott Gurdak rounded out the top five.

After a four-wide salute honoring Maloy, Doug Eck led the first lap before a lap-two incident collected the cars of Oakes, Andy Kania, Chuck Parker, Ryan Scott and Rich Gardner. Eck restarted out front with Dvid Scott and Maloy hot on his heels.

Scott took command on the next lap, just before a yellow for Greg Johnson, and Scott led the next restart with Eck, Maloy, Dutch Davies and T.J. Downs giving chase. But Eck spun, collecting Chris Hackett, Davies and Darrell Bossard for the third yellow in as many laps.

Scott edged away on the restart while Barton made a fourth-to-second move on the sixth lap to get by Boozel and Maloy.

After Kania spun at the turn-four exit for a lap-10 yellow, Scott rolled on in the high groove while the low-running Barton tried to keep up. Barton managed to pull alongside in the corners, but Scott’s momentum carried him back ahead on the straights.

The frontrunners hit traffic on lap 23, and when Barton moved high to get around the slower cars, he lost ground to Scott. That helped Scott slip away and he maintained the five-length lead he held at the white flag in taking the checkers.

Maloy, who finished 10th, announced his retirement. The track’s 2001 and 2007 Late Model champion, seventh on the all-time victories list with 23, led the feature’s four-wide salute at the outset of the main event.

Notes: Scott’s Rocket Chassis is sponsored by Valone Ford and Hornburg Drilling. ... Scott’s second victory of the season is the 19th of his career at Stateline. ... The night’s racing was sponsored by Roberts Trucking, Arthur R. Gren, Tobber Racing and Lias Tire. ... Damian Bidwell won the Crate feature and Dustin Eckman won his second Limited Late Model feature of the season. ... Stateline’s next Super Late Model special is July 24 for the $10,000-to-win visit by the Lucas Oil Late Model Dirt Series.