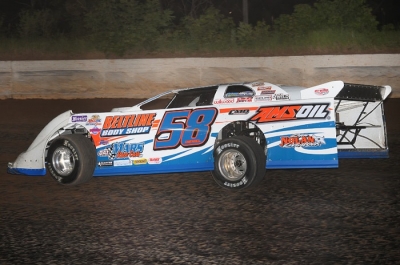 A.J. Diemel led comfortably most of the caution-free feature at Red Cedar. (chrisburback.com)

MENOMONIE, Wis. (June 29) — Taking the lead on the ninth lap, A.J. Diemel of Navarino, Wis., dominated Friday’s WISSOTA Challenge feature at Red Cedar Speedway. Diemel’s $3,000 victory in the first series visit in eight years was his second in a row on the tour. | Slideshow

Polesitter Steve Isenberg led the first lap, but Gilbert took command on the second circuit as Diemel stalked the frontrunners. Diemel took a spot from Prochnow, dropped Isenberg to third and then began chasing down Gilberts.

Using the middle of the track, Diemel ran side-by-side with Gilberts for a few laps before swinging past on the ninth lap, quickly pulling away from the field. The seventh-starting Redetzke took up the chase, eventually reaching the second spot on lap 15 and cutting Diemel’s lead to about seven lengths as the leader faced traffic.

Diemel finally worked past the slower cars, extending his lead as Redetzke was stuck with the same challenge. Diemel, racing out of the Mars Race Cars shop in Menomonie, cruised the rest of the way in the caution-free event.