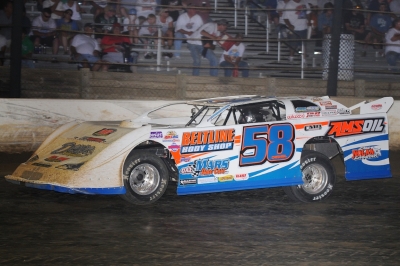 Diemel’s victory paid $3,000 as he collected his third straight series victory over a four-day stretch and second at the 3/8-mile Deer Creek oval. | Slideshow

Pember led Justin Fegers and Yaggy early in the race with Diemel moving into the fifth spot after a lap-five restart. After a lap-12 caution, Diemel, Matthees and Pember battled three-wide for the lead with Diemel edging Matthees for the point as Pember dropped to third. A charging Redetzke took third on the 14th lap, got second on lap 19 and challenged Diemel for the lead on lap 20.

The frontrunners ran side-by side with Redetzke nosing ahead of Diemel on lap 22. Redetzke was still in command late in the race, but after a final caution appeared on lap 36, Diemel regained the lead on the restart and led the final four laps.

Notes: Diemel’s No. 58 is sponsored by Mars Race Cars, Beltline Body Shop, Amsoil, Deppe Enterprises and Dan Nolan Livestock. ... Diemel is streaky on the circuit; he had four victories in a row in 2006 during his last success on the circuit. ... Action continues on the series Sunday at Eagle Valley Speedway in Jim Falls, Wis.