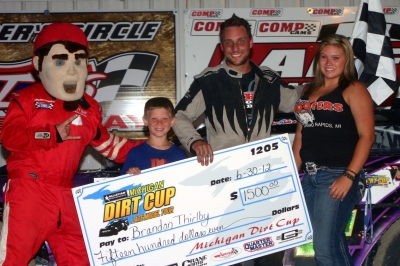 Thirlby and former track champion Eric Spangler of Lake City, Mich., started on the front row with Spangler leading the first four laps. Thirlby took command on the fifth lap, brining Neiser and Olger along with him while Roberts tried to join the battle.

Thirlby was able to get a cushion of lapped cars between him and his pursuers and ended up controlling the rest of the race for his third victory of the season overall at I-96 Speedway.