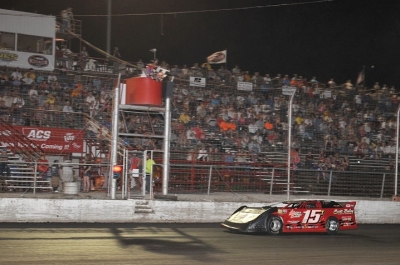 CORNING, Iowa (June 30) — Driving a borrowed race car like he’d driven it all his life, Jesse Stovall of Galena, Mo., rallied from his 11th starting spot on Saturday at Adams County Speedway to win the inaugural Liberty 50.

“The race car was phenomenal. I just can’t thank everybody (enough),” Stovall said after extending his MARS points lead. "This has been kind of a long weekend. We hurt a motor last night in our car that we had up here for our (Al Humphrey-owned) primary (car), and Scott Bailey, my motor builder, and David Turner, the owner of the car, were nice enough to let me use it, and Scott was nice enough to bring it up here to me. It’s one of those Cinderella stories kind of thing.”

Stovall took the checkers a straightaway ahead of Terry Phillips of Springfield, Mo., who won the previous night’s tri-sanctioned event at I-80 Speedway in Greenwood, Neb. Chad Simpson of Mount Vernon, Iowa, was third followed by Jason O’Brien of Atlantic, Iowa, who led the first 34 laps at Adams County in search of his biggest career victory. MLRA points leader John Anderson of Omaha, Neb., came from his 16th starting spot to round out the top five.

O’Brien got the jump on Phillips at the outset with Simpson and Denny Eckrich in pursuit. Phillips nearly pulled alongside O’Brien on laps 22 and 24, and the top four were running in a tight pack when Bill Koons went over the turn-three banking to draw a mid-race yellow.

Stovall was up to seventh on the restart and, after Chris Spieker briefly nose his way into fourth, came alive, grabbing the third spot by the 30th lap while O’Brien and Phillips were still leading the pack.

“The race car was just really good. My car kept steering really well. I noticed a lot of the guys, they couldn’t steer through the corners good,” Stovall said. "The first part of the race, until we had a caution. ... I was just riding. I was maybe a top-10 car. But we took off after that restart and everybody, I just noticed, we went into the corner and nobody could turn.

“I was just biding my time and waiting for somebody to make a mistake off the corner, and I could just pick ‘em off one by one.”

Stovall continued his progress toward the front, nipping O’Brien at the line for the lead on lap 35, just before a caution appeared for a turn-two skirmish involving J.C. Wyman and and Rob Moss.

A final caution appeared on lap 39 when reigning track champion Paul Glendenning got sideways on the frontstretch, and Stovall cruised the final 11 laps in stretching his lead comfortably the rest of the way at the half-mile oval.

"The racetrack was good,” Stovall said. "I think it kinda rubbered up towards the end, but it was a pretty good ol’ racetrack. These racetracks I turn my nose up at are usually the ones I win at for some reason, I don’t know.”

Notes: Stovall’s David Turner-owned Victory Circle Chassis is powered by a Scott Bailey Racing Engine and sponsored by Adrian Bank and ACS. ... Stovall has seven career MARS victory; it was his first trip to victory lane with MLRA and the Corn Belt Clash circuits. ... Twenty of 28 starters were running at the finish. ... MARS competitors head to Monett (Mo.) Speedway on July 3. ... MLRA racers return to action July 14 at Lucas Oil Speedway in Wheatland, Mo., in a race also sanctioned by the Lucas Oil Late Model Dirt Series. ... The Corn Belt Clash returns to action July 18 at U.S. 36 Raceway in Osborn, Mo.