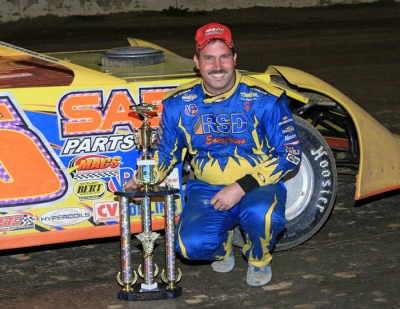 CUMBERLAND, Md. (April 12) — Dropping in for a rare start on the Mid-Atlantic Championship Series, Shane Clanton of Locust Grove, Ga., outdueled Billy Decker of Unadilla, N.Y., to capture the MACS opener at Allegany County Speedway. Clanton, traveling between World of Outlaws events in Virginia and Pennsylvania, earned $5,000 for his victory in the Western Maryland Open 50, his first ever at the track nicknamed “The Rock.” | Slideshow

On a blustery day, Clanton led most of the race as four cautions slowed the action the first 21 laps. On the lap-21 restart, Clanton couldn't shake Decker and the frontrunners raced nose-to-tail through traffic starting on lap 31. With Chub Frank joining the battling up front, Decker took command on the 37th lap with a low-side move in turn three. Clanton's high groove carried him back out front the next lap as Decker had his hands full with traffic. Frank fell out on a lap-42 caution and Decker couldn't make another move, finishing eight lengths behind Clanton at the checkered flag. Another New Yorker, Tim Fuller of Edwards, was third behind Decker with former MACS champion Mike Balzano of Parkersburg, W.Va., and Jeremy Miller of Gettysburg, Pa., rounding out the top five.