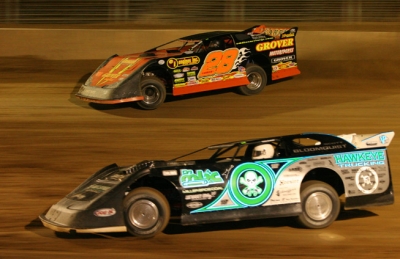 Carrier first swept into the lead with a bold outside pass exiting turn four on the 21st lap, then won a side-by-side battle over the next 10 laps before edging away. The Hall of Famer Bloomquist made his last-gasp charge starting on lap 39 as he worked the low groove against Carrier's high line as third-running John Blankenship fell back and it turned into a two-car race.

The last yellow of caution-plagued race — there were a dozen stoppages — came out on the 43rd lap, and the two resumed their battle with seven laps remaining. Carrier edged away by seven lengths with five remaining as Bloomquist's low groove appeared to go away.

Carrier finished nearly a half-straightaway ahead of Bloomquist at the checkered flag. Blankenship was a distant third, just ahead of Billy Drake while Earl Pearson Jr. was fifth. Bart Hartman, who led most of the first 20 laps, faded at the finish on a cool, blustery evening in southcentral Ohio. A variety of drivers challenged up front, including Wayne Chinn and 17th-starting Dan Schlieper, but several drivers ran into mechanical troubles or had flat tires on a rough racetrack.

The race started with a scary frontstretch wreck when Don O'Neal's car climbed the concrete wall exiting turn four on the first lap and rolled once before landing back on its wheels. He quickly climbed from the No. 71 under a red flag, uninjured in just the second rollover of his career.

A caution appeared on the fourth lap for a slowing Josh McGuire; Doug Drown also dropped out under the first yellow ... Steve Casebolt got turned around on the backstretch for a lap-seven caution. ... Justin Rattliff got over the turn-three banking to draw a lap-nine caution. ... A caution appeared on the restart when Mike Wilson slowed in turn four. ... On the following restart, Mike Marlar went spinning off the backstretch as he and Terry Casey battled for the same piece of real estate. Casey dropped out and Marlar restarted on the tail. ... On the 10th lap, R.J. Conley got turned in turn four in a scramble with John Blankenship. ... Rick Combs slowed to bring out a lap-12 caution. ... Marlar slowed on lap 14 to draw the race's seventh caution. Darrell Lanigan lost a driveshaft and was pushed off the track during caution period. ... Dan Schlieper lost fourth place when he had a flat tire on the 19th lap to draw a caution. ... Another caution appeared on the 23rd lap for Jeep Van Wormer's turn-four spin. ... The race ran 20 green-flag laps until Dan Schlieper's lap-43 spin in turn four. ... Wayne Chinn ran in the top five much of the way but pulled out on the 34th lap. ... Fans were fortunate to get to see the feature event. Rain earlier in the week threatened to cancel the event altogether, then light raindrops that began at the conclusion of Saturday's heat races delayed action for nearly 40 minutes. The rain stopped during the consolation races and the feature was completed under dry skies. ... Wilson, scheduled to start 14th, volunteered to start on the tail of the feature. ... Josh McGuire rallied from near the tail of the first consolation race to finish second. ... Don O'Neal went from 12th to second in the second consolation. ... Steve Francis dropped out of the first consolation race after a plume of smoke came out of his car, and the night's second fast qualifier failed to make the feature. He wasn't able to start his heat race after his left front tire fell off during parade laps because the lugnuts weren't tight enough. ... Scott James spun by himself on the first lap of the second consolation, then had a flat tire while charging back to the front and was forced to take a provisional starting spot. James' nosepiece got bent up during the feature parade laps and he had to pit before the feature. ... Casebolt also had a flat during the second consolation and took the other provisional.

Fast qualifier Wayne Chinn, Eddie Carrier Jr., Bart Hartman and Scott Bloomquist were heat winners at the Lucas Oil Late Model Dirt Series-sanctioned Glockner 50 at K-C Raceway. In a draw among heat winners, Bloomquist will start on the pole position for the $10,000-to-win feature. Light raindrops began to fall at the conclusion of the heat races as a weather system moved just south of Chillicothe and the track delayed the 12-lap consolation races. Offiicals called for consolation races to line up again after a delay of about 25 minutes and a few raindrops continued to fall during the consolations.

In the first heat, Chinn grabbed the lead on the second lap when Tim Dohm slipped high exiting turn two and wasn't challenged the rest of the way. Series points leader Terry Casey, rebounding from a poor qualifying effort, rallied from 10th to finish second ahead of John Blankenship, who restarted fifth with two laps to go. He was third ahead of polesitter Rick Combs, the final transferree. Dohm ended up slipping back to sixth after leading early.

In the second heat, Eddie Carrier Jr. took the lead on the sixth lap when race-long leader Josh McGuire exited with a flat tire. Carrier finished more than a straightaway ahead of Mike Marlar and Jeep Van Wormer, two other heat transferrees. Ninth-starting Mike Wilson ran as high as third, faded after a restart but managed to get the fourth transfer spot. Steve Shaver ran among the leaders early but slowed on the second lap to draw a caution. Steve Francis scratched when his left-front tire fell off during the parade laps, and he pulled to the pits.

In the third heat, Bart Hartman jumped into the lead from outside the front row and edged away for a victory in the 10-lapper. Hartman nearly slipped over the backstretch banking midway through the race but stayed steady the rest of the way. Third-starting Matt Miller lost the second spot to Billy Drake midway through the race, and the fifth-starting Drake got the second transfer spot ahead of Miller, who had to fight off final transferree Justin Rattliff. Eighth-starting Darrell Lanigan was fifth. Steve Casebolt was running third on the fifth lap when he had a flat left rear tire, and he wasn't able to get back up into a transfer position. Polesitter John Mason got off to a poor start, fell back to seventh and got out of shape in turn four to collect Scott James on the second lap.

In the fourth heat, fifth-starting Scott Bloomquist inherited the lead on the sixth lap when Don O'Neal climbed the turn-four wall to blow a straightaway lead. Bloomquist cruised the rest of the way to outrun R.J. Conley while polesitter Earl Pearson Jr., who pitted to change a flat tire after a first-lap scramble, rallied past Donnie Moran off the final corner to finish third. Doug Drown led early and ran third much of the race before finishing fifth.

Home-state driver Wayne Chinn blazed to the fastest qualifying time for the Lucas Oil Late Model Dirt Series-sanctioned Glockner 50 at K-C Raceway. Chinn's fast time of 14.483 topped more than 50 qualifiers at the 3/8-mile oval. “Things are going pretty good with the C.J. Rayburn Race Car here,” said the driver from Bradford, Ohio, driving of the yellow and black No. 1. “Things have been clicking, so hopefully we can keep it up.”

Jared Hawkins took a wild ride into turn three as his car tumbled repeatedly before ending up on its lid. He emerged 90 seconds after the car came to a rest and walked under his own power to an ambulance with no apparent injuries. ... Steve Shaver of Vienna, W.Va., debuted his new No. 30 Victory Circle car, a machine similar to the car that has carried Billy Moyer to a nation-high nine victories in 2008. ... Matt Miller of Waterville, Ohio, was making his first 2008 start in a Stephen McCullough-owned car. He also drives regularly for Illinois-based Moring Motorsports. ... Among drivers arriving at K-C after racing Friday night with the World of Outlaws Late Model Series at Virginia Motor Speedway near Saluda, Va., were Darrell Lanigan of Union, Ky., John Blankenship of Williamson, W.Va., and Steve Francis of Ashland, Ky. ... Terry Casey of New London, Wis., the series points leader and three-time on the Lucas Oil tour in 2008, pulled out for time trials but retreated to the pits. He was able to take a single lap at the conclusion of qualifying but hit a rut in turn one and qualified just 37th fast. ... Five-time Dirt Track World Champion Freddy Smith of Seymour, Tenn., a series regular, was a no-show at K-C following the recent death of his father-in-law. ... K-C drew a decent crowd considering a chilly, blustery evening in southcentral Ohio. ... The only other division in action was hobby stocks. Officials were trying to keep the pace going with potential precipitation forecast for late in the evening.