Miller wins WoO race at VMS: 'We finally did it!' 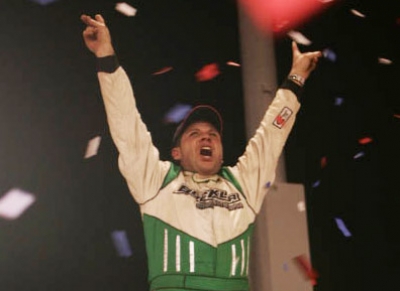 SALUDA, Va. (April 11) — Jeremy Miller of Gettysburg, Pa., had just one thought racing through his mind after winning the 50-lap Rumble on the River IV at Virginia Motor Speedway. “I just said to myself, ‘We finally did it!’ ” remarked Miller, a 37-year-old regional star, who made the 50-lap event his long-awaited first career World of Outlaws Late Model Series victory. “I know for a fact — because I’ve been through plenty of disappointments — that a win on this series doesn’t come easy, so it’s an awesome feeling to do this.” | Car owner Charles Buckler | Notebook | Slideshow | Video

A hard-luck WoO A-Main loser on three occasions last year, Miller got the job done in truly memorable fashion at Bill Sawyer’s pristine half-mile oval. He overtook red-hot dirt Late Model legend Billy Moyer of Batesville, Ark., for the lead on lap 36, and then repelled late-race pressure from Moyer and defending WoO champion Steve Francis of Ashland, Ky., to emerge triumphant to the tune of $10,650, including the $500 WoO ‘Bonus Bucks’ prize for being the highest-finishing driver who hadn’t previously won a tour event.

The polesitting Francis settled for a second-place finish in Dale Beitler’s Reliable Painting/Valvoline Rocket, 2.051 seconds behind Miller. Moyer, meanwhile, plummeted to 17th in the final rundown after his Victory Circle M1 Chassis suffered a blown left-rear tire on lap 45 as he was attempting to mount a last-ditch bid to regain command.

Moyer, who led a majority of the distance, saw his three-race WoO win streak come to an end, adding even more luster to Miller’s emotional victory. A Moyer triumph would have allowed him to match the WoO modern-era (2004-present) consecutive-win record of four in a row set by Rick Eckert of York, Pa., in 2006. No one was more aware of the halting of the Moyer win streak than Miller’s car owner Charles Buckler, who literally bounded to Victory Lane to greet his driver.

“We beat a legend!” exclaimed Buckler, one of the most excitable personalities in the dirt Late Model pit area. “We beat Billy Moyer!

“Oh, man,” Buckler continued, “this is the best race I’ve ever won. We beat the best! We beat the Outlaws!”

The preternaturally calm Miller was far more reserved than his car owner, but he nonetheless was amazed by his accomplishment. “My dream in racing was always to race with the best drivers,” said Miller, whose previous best WoO was second, on Sept. 21, 2007, at Bedford (Pa.) Speedway. “Billy Moyer, Steve Francis and all these guys with the Outlaws — they are the best. I have a lot of respect for all these guys, and I’m just very fortunate to be racing up there with them.”

Miller passed the drivers he so admires. After starting fourth in a brand-new Complete Flooring/USA Spares, Inc. Rocket car powered by a Bullock Racing Engine, he slipped by Francis for second on lap 13 and chased Moyer’s pacesetting machine until nosing into the lead for the first time on lap 34.

Moyer, who started second and led from the initial green flag, managed to surge back ahead on lap 35. But Miller came off the inside of turn four to grab the top spot on the 36th circuit.

And that, for all intents and purposes, was the race. There was no mechanical failure while leading like Miller experienced last year in WoO events at VMS and the Dirt Track @ Lowe’s Motor Speedway, or a late-race caution flag to allow a regular Outlaw to pass him for the lead like in his heartbreaking defeat to Chub Frank of Bear Lake, Pa., last season at Ohio’s Sharon Speedway.

Actually, there was a late caution flag, on lap 45 for Moyer’s exploded tire. But it was a welcomed sight for Miller, who at the time was feeling pressure from Francis while racing through lapped traffic.

“The fans like to see that heated-battle stuff, but as a driver, you’re thinking what’s best for you,” Miller said when asked his thoughts on the race’s seventh and final caution flag. “And it was definitely best for me to have a clean racetrack (for the last five circuits).

“There’s no doubt about it, when you get to lapped traffic, they’re probably better racers than I am because they do it for a living and they race so much. They have 20-some races in already this year and I had 20-some laps in all year until tonight, so it definitely benefited me to have the last caution come out.

“Some nights it didn’t benefit me, but it was our night tonight.

Miller paused, and then added, “I love racing with the Outlaws. Just to be up there battling with them is all I ever dreamed of — and hopefully now that we got the first win, maybe we can get another one.”

Francis, 40, was congratulatory to Miller.

“We had a shot (to take the lead) a few different times,” said Francis, who, like Miller as well, ran American Racer tires. “I think my car was probably more maneuverable in traffic than his was, but he drove a good race. He did what he had to do and got the win.

“I know what it means to him (to win a WoO event),” he added. “It’s something you always try to do your whole life, and it’s definitely no surprise that he was able to do it. Especially in this part of the country, there’s quite a few guys who have a legitimate shot to win one of these shows when we roll in.”

The 50-year-old Moyer, meanwhile, was searching for answers for his tire problem.

“The way it’s blistered-up looking, I think it may have been getting low (on air) before it blew out,” said Moyer, eyeballing his destroyed Hoosier tire alongside his trailer after the race. “The car sorta changed around on me a little bit there (at mid-race), went away from how good it was at the beginning.

“(Miller) did a good job,” he added. “I ain’t making any excuses, but something happened there and we’re trying to figure it out. I would’ve liked to been able to finish the thing. It would’ve been interesting.”

Jeremy Miller's Charles Buckler-owned Rocket Chassis is powered by a Bullock Racing Engine and sponsored by Complete Flooring, USA Spares, Torco Racing Fuels, American Race Tires and Genesis Racing Shocks. ... Shannon Babb of Moweaqua, Ill., finished 11th after starting 23rd because a heat-race slap of the wall between turns three and four forced him to use a provisional starting spot. ... Some of the WoO drivers, including Francis and Clanton, planned to head to K-C Raceway near Chillicothe, Ohio, for Saturday's Lucas Oil Late Model Dirt Series event. ... The next WoO event is scheduled for Tuesday (April 15) at Lernerville Speedway in Sarver, Pa., with the feature paying $10,000 to the winner. ... The first mega-event on the 2008 WoO tour is April 18-19 at the Dirt Track @ Lowe's Motor Speedway for the $50,000-to-win Circle K Colossal 100.