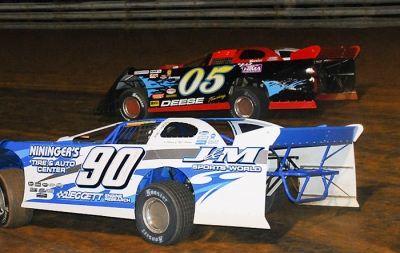 HAGERSTOWN, Md. (April 5) — Five-time Hagerstown Speedway Late Model champion Roy Deese Jr. won at the half-mile oval for the first time in three seasons to capture the first points event of the 2008 season. In winning his first Hagerstown feature since May 7, 2005, the Laurel, Md. veteran started outside the front row and beat polesitter Gary Stuhler into turn one. Stuhler hung close but never mounted a serious challenge as Deese crossed the finish line .47 seconds in front.

“By golly, it feels good to be back … it’s been a long time since I’ve won a race here,” Deese said. “The fans have been great, the track has been great. We’ve had a great surface to race on every night this year. We got way behind on technology after I got a little sick and we’re finally starting to catch up. Gary is a good racer and he raced me clean. We’ve been having some problems with the brake system and the pedals on the floor. Thank goodness this one is over.”

Deese credited his Russell Baker Racing Engine for giving him plenty of power. “I’ll tell you, when I come off the corners, I better have a plan as this thing is going down the straightaway in a hurry.” — Bob Vores

CENTRAL PENNSYLVANIA ADDS NEW CLAY: New owner Tim Bainey is laying new clay on the 3/8-mile Central Pennsylvania Speedway oval near Clearfield, Pa. About 8-10 inches of new clay, harvested from property of a local coal company, is being spread around the track, about 125 truck loads of clay in all. The track's first event is a $5,000-to-win race on May 25 for the first-year UFO tour. — Terry Whetstone

KING OF THE KNOB ADDED TO UFO SERIES: The King of the Knob, the biggest annual event at Roaring Knob Motorsports Complex, will be sanctioned this year for the first time as part of the new UFO tour. Roaring Knob becomes the fifth track to join the 12-race UFO circuit. The Sept. 6 King of the Knob will pay $5,000 to the winner. — From series reports

WINCHESTER HOSTS APRIL 12 SPECIAL: Winchester (Va.) Speedway is paying $2,500 to win on April 12 for a 25-lap Super Late Model special sponsored by Ernie's Towing and Hauling. Besides Winchester regulars, among drivers expected in action is World of Outlaws regular Josh Richards in the Ernie Davis-owned No. 25. — From track reports

CHILLER THRILLER WINNER USES CRATE ENGINE: Dennis Lunger of Corry, Pa., won Mercer (Pa.) Raceway Park's Chiller Thriller on April 5 using a GM 604 crate engine in an event for steel-block Late Models. "I was really shocked," said Lunger, who earned $2,000 for his 30-lap victory. "This Crate engine really took off for us. We made some changes and freed the car up. We were a little tight in the heat. The guys worked really hard and gave me an awesome car. This thing was really good tonight. We really like it down here. Every time we run here we do well." — Mike Leone