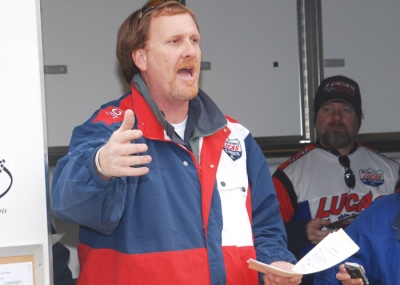 After a flurry of rollover accidents during Georgia-Florida Speedweeks, Lucas Oil Late Model Dirt Series director Ritchie Lewis wants to make sure that driver safety stays on the forefront of issues in Dirt Late Model racing. Lewis hopes a safety awareness weekend scheduled for the May 9-10 Lucas Oil stop in Wheatland, Mo., spurs an evolving process that will improve safety standards for the series and Dirt Late Model racing as a whole.

"This is not a one-shot wonder," Lewis said of the inspection program that will be handled by former NASCAR driver Randy LaJoie, a vocal proponent of race car safety and a manufacturer of safety seats. Lewis said LaJoie will inspect every Late Model entered in the $40,000-to-win Super Clean Diamond Nationals at Lucas Oil Speedway and issue a report card on each. LaJoie, the team and the series will each get a copy of the report that will detail his evaluation of the car's cockpit safety. The series plans to invite LaJoie back late in the season or early in 2008 to check progress of teams. "Have we fallen behind," Lewis said, "or have we improved?"

Safety issues came to the forefront in February when three-time Lucas Oil champion Earl Pearson Jr. was knocked unconscious in a scary, flipping accident at Volusia Speedway Park in Barberville, Fla., one of four rollover accidents during Georgia-Florida Speedweeks. Pearson's car owner, former NASCAR champion Bobby Labonte, helped spearhead discussions about improving driver safety by adapting technology developed for NASCAR's highest levels. "With the technology we have today," Lewis said, "there's no reason to let a driver get knocked out."

Lewis checked out the wrecked cars of Pearson as well as Hall of Famer Scott Bloomquist, who went on his lid for the first time in his career at East Bay Raceway Park in Gibsonton, Fla., to check on the damage inflicted by the rollovers and pronounced both machines "structurally sound." Lewis lauds chassis builders with providing safe cars overall, but he expects LaJoie will focus on potential improvements in the cockpit. Among specific issues:

• Cockpit structures that make it "basically impossible to get out of the right-hand side of (the) car" for many drivers, Lewis said, because aerodynamic sheetmetal that fills space beside the driver.
• Fire extinguishers and push-button fire-extinguishing systems.
• Window nets.
• HANS or other head-and-neck restraint devices.

With the exception of the ability to exit the right side of the car, each of those are among improvements that the Labonte-owned team has added or plans to add for cars driven by Pearson. — Todd Turner

Billy Moyer has a chance to make World of Outlaws Late Model Series history when the tour begins a three-race East Coast swing April 11 at Virginia Motor Speedway. The hottest dirt Late Model driver in the nation is riding a three-race WoO winning streak, giving him a shot at tying Rick Eckert’s modern-era record of four consecutive victories in Friday's Rumble on the River IV at the Saluda, Va., oval owned by Bill Sawyer.

A $10,000 triumph at VMS would set Moyer up to gain sole possession of the consecutive-win standard on April 15 at Lernerville Speedway in Sarver,Pa., which hosts the 50-lap Showdown in Sarvertown that offers another $10,000 winner's purse. Of course, Moyer, 50, of Batesville, Ark., is a veteran of more than three decades behind the wheel, so he knows that he’s best served enjoying his three straight wins rather than talking about the possibility of four — or more — in a row.

“We’re just riding it out,” Moyer said of his streak, which includes nine overall dirt Late Model wins to date. “You just never know what tomorrow is gonna bring in this sport. For sure, we’re not gonna continue to win every race. I hope we can, but I know everything is just going our way right now.”

Moyer's pursuit of a fourth straight victory might require some creative travel arrangements. His father, Bill Moyer, is scheduled to undergo a medical procedure on his heart this Wednesday in Iowa. Moyer plans to travel to his native Hawkeye State to be with his father, who attended Saturday night’s Illini 100 at Farmer City. It’s possible that doctors could determine the elder Moyer needs more serious heart surgery, so Moyer is uncertain whether he’ll drive east with his team or fly to meet them at VMS.

The WoO modern-era consecutive win record of four in a row that Moyer is chasing was established in 2006 by York, Pa.’s Eckert. In late-May and June Eckert rolled to successive victories at North Central Speedway in Brainerd, Minn., Deer Creek Speedway in Spring Valley, Minn., Western Kentucky Speedway in Nebo, Ky., and East Alabama Motor Speedway in Phenix City, Ala. — Kevin Kovac

After inclement weather cancelled K-C Raceway's first two regular-season events, the track near Chillicothe, Ohio, will launch its 2008 season on April 12 with the Lucas Oil Late Model Dirt Series-sanctioned Glockner 50, a $10,000-to-win event. Track owner and promoter Jim Nier is anxious to show up some improvements at the 3/8-mile oval in southcentral Ohio.

"We've put a lot of work into the facility this winter when the weather permitted," said Nier, who still races a sprint car occasionally. "We've added additional lighting to the track, added some clay, remodeled the pit concessions, and purchased some new equipment in an effort to make this year our best yet."

The K-C event, which will be taped for later telecast on Speed, is among Lucas Oil races included in the Jasper Engines Road to Wheatland, which offers incentives that pay 20 drivers with perfect series attendance a guaranteed $600 at each event preceding the Super Clean Diamond Nationals on May 9-10 at Lucas Oil Speedway in Wheatland, Mo. — James Essex

Preceding the Circle K Colossal 100 at the Dirt Track @ Lowe's Motor Speedway on April 19, the track will host a Driver Autograph Party where competing drivers will greet fans and sign autographs. Hosted by Circle K, the 90-minute pit party is scheduled for 4:30 p.m. under the main grandstand of the Concord, N.C., oval.

To gain admission, fans must present an event ticket along with an empty can of Full Throttle energy drink, which can be purchased at any area Circle K store. Once inside the pit party, each fan will receive a limited edition Circle K Colossal 100 event poster. Fans can also register for the chance to serve as the honorary race starter or to ride in a special pace vehicle. — Keith Waltz