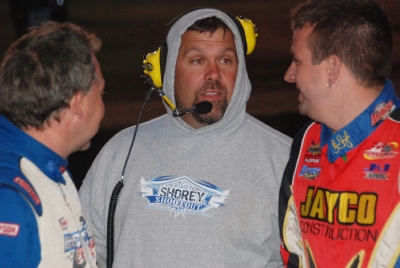 A 55-car field teeming with top-notch talent. A record, standing-room-only crowd. A racy, multigroove track surface. And, best of all, a dramatic 100-lapper that will be remembered as one of the best Dirt Late Model races of this or any other season. Roll all that up, and there’s no doubt that the inaugural Illini 100 at Farmer City (Ill.) Raceway was a smashing success. | Race story | Saturday slideshow | Feature preview | Prelims notebook | Qualifying and heats | Friday slideshow | Practice | Brian Birkhofer heat video

The excitement of the biggest dirt Late Model event ever run in the state of Illinois impressed virtually everyone, including World of Outlaws Late Model Series regular Shannon Babb, a native of nearby Moweaqua, Ill., who grew up racing at the quarter-mile oval.

“I knew this would be a good place to have a big show, but honestly, I didn’t think it would be that good,” a smiling Babb said after engaging in a battle for the ages that saw him finish second by a half-car length to his racing mentor Billy Moyer. “It was awesome, and hopefully it’ll be a yearly deal now and just get bigger and bigger.”

That’s the plan for the Illini 100, says Farmer City promoter Don Hammer. He was thrilled with the competitor and fan support for the first-time, $20,000-to-win event and envisions the weekend developing into a must-see early-season show on the dirt Late Model calendar.

Hammer and his Farmer City track crew whipped up a racing surface that produced fast speeds (witness Moyer’s new track record lap of 11.973 seconds during Friday’s time trials) and entertaining action with a minimum of roughness.

“It had a hole or two in the track, but heck, it’s springtime,” said Moyer, who credited Hammer with doing “a good job” on the surface. “Myself, I think every track should have a bump or two. It doesn’t bother me any. It gives you something to do.”

Shannon Babb had second thoughts about his tire-compound choice at Farmer City when he rolled onto the track for driver introduction. So what did he do? He conferred with crew members Tommy Grecco and Jay Hunt and changed the left-rear and right-front tires of his Clint Bowyer-owned Rayburn car, giving him three softer 20-compound tires and a hard-compound 40 on the right-rear.

By WoO rules, the tire change on the racetrack forced Babb to the rear of the 24-car field for the start. But he was scheduled to start 19th, so moving back five spots wasn’t a major problem. “I walked out there and seen how much traction was left on the bottom,” Babb said. “Right there I thought we should go softer on tires. If you have the same thing as everybody else you’re gonna be equal, so we made the change and it worked real good for us.”

Babb came close to becoming only the second driver in the WoO’s modern era to win a tour event after starting last. Tim McCreadie holds the last-to-first distinction, accomplishing the rare feat on June 5, 2005, at Dakota State Fair Speedway in Huron, S.D.

Defending WoO champion Steve Francis summed up the Illini 100 simply. “It was a helluva race,” he said. Francis, who briefly led the race on two occasions, finished third, just a few lengths behind Moyer and Babb. He felt his outcome could have been a little better.

“We were a little tight getting in to the middle of the corner,” Francis said of his Dale Beitler-owned No. 19. “But what kinda buried us was when Moyer got into us (with a slide-job for second place on lap 82). We lost a lot of ground there. Really, we were lucky to hold on to third, so I was happy with everything. It came down to where we needed track position, and we didn’t have it.”

Francis was able to survive without losing a position when Moyer’s slide up in front of him on the 82nd lap forced him to check up, but the chain-reaction jam-up behind him cost WoO regulars Chub Frank and Josh Richards. Frank, who was running fourth at the time, slowed to avoid Francis and was hit by Tim McCreadie. The contact bent Frank’s left-side bodywork into his tire, leaving him with a blown tire on lap 88 that relegated him to a 12th-place finish.

“I was just trying to keep my car in one piece and get a good finish out of it,” Frank said. “The line I was using wasn’t the fastest, but I ran it because I was trying to stay out of the holes so I wouldn’t tear a left-rear tire off like I saw so many guys doing. We were just hoping for a good points night, but we got caught anyway and got a flat.”

Richards, meanwhile, ran in the top five for much of the distance. But his ill-fated positioning in the Moyer-Francis aftermath cost him three spots and he only recovered enough to finish sixth. The 20-year-old Richards had high hopes for the 100 after timing second-fastest, winning a heat and capturing the eight-lap dash on Friday, but his Rocket No. 1 was off just a little on Saturday. He said changing the machine to a four-link from a swingarm setup just before the feature and going too hard on tires hampered his effort.