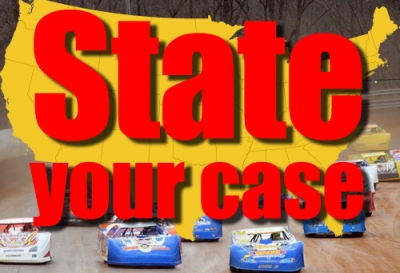 Just like the men's NCAA basketball title game, DirtonDirt.com's State Your Case tournament went down to the bitter end. And when it was all over, Illinois narrowly edged Iowa in the final matchup of the bracket-style tournament to determine the best state for Dirt Late Model racing. | Championship | Semifinals | Quarterfinals | Second round | First round

With both Midwest states receiving equal votes in the final matchup, the deciding factor was the tiebreaker of total votes received throughout the tournament, and Illinois came out on top by a mere three total votes over Iowa. Tournament matchups were voted on by the 24-member DirtonDirt.com panel, each of who wrote capsules advocating each of the 24 states in the tournament.

Here's the final tournament bracket along with the capsule that led to victory for Illinois:

State your case: Is there any question which state has the best Dirt Late Model racers From the state that has produced the likes of The Tall Cool One, Shaggy, the Moweaqua Missile, King Kong, the Thriller, the Flatland Flash, and the One-Man Band, the Land of Lincoln has certainly produced it's share of the sports finest. Some of the Illini State's crop have already been inducted into the Dirt Late Model Hall of Fame and others are on that illustrious path.

Best historical drivers: Bob Pierce immediately pops into your mind. The Tall Cool One, one of the original outlaw barnstormers, notched his place in history by tearing up high banks around the Midwest in notching hundreds of victories, a UMP weekly championship and a memorable North-South 100 victory. Chicagoland star Tony Izzo Sr. is also high on the list (as are his sons, Tony and Joe) along with Dick Taylor, Jim Leka, Roger Long, Jim O’Connor and ageless Don Klein, who has hundreds of victories and 17 track championships.

Contributors and contributions to the sport: Illinois has been the heart of UMP and its Summernationals year after year.

Illinois fans are best because ...: they know the sport and know how to enjoy it, from the tailgating atmosphere at the Fairbury or Farmer City to the campers and party atmosphere at Macon, Illinois has the best fans!

If all that's not good enough: Those at Macon's Summernationals race in 1997 will never forget a story that's a microcosm of Illinois racing. After Shannon Babb's car broke on the pace lap, also-ran Virgil Bilbrey pulled to the infield to allow Babb to start his car from the tail. Babb rallied to an amazing victory in the borrowed car but lost it at the scales (Bilbrey's substantial belly and 80 extra pounds weren't in the car). Man, I love Illinois racing. (Additional information from Michael Rigsby)