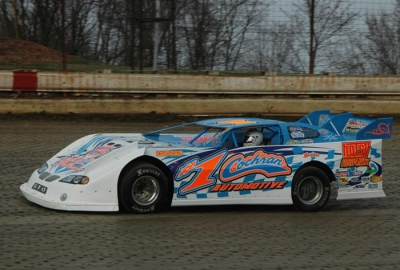 IMPERIAL, Pa. (April 5) — Lynn Geisler of Cranberry Township, Pa., hasn't had many dry spells at Pittsburgh's Pennsylvania Motor Speedway, but he went the entire 2007 season with a victory. That drought's forgotten now.

The Hall of Famer started of 2008 right by capturing the opening-night 25-lap feature in the Pizza Hut-sponsored Late Model division at PPMS. The all-time victories leader at PPMS notched the 67th of his career and his first since June 24, 2006. | Weekly results

Geisler took the lead from Steve Baker on the 13th lap and went on to a victory over Brandon Burgoon, who recovered from being shuffled back to 10th on a restart. Jim Stephans was third with his best-ever Late Model finish. Baker (lost fuel pressure), Jared Miley (flat tire) and Keith Barbara (engine problems) were among contenders who fell by the wayside. — From track reports

HOMETOWN ROOKIE SCORES AT I-44: Tony Jackson Jr. of Lebanon, Mo., outran two-time champion Brad Looney for a his first-ever UMP Super Late Model victory at I-44 Speedway. Jackson, last year's modified champion at the Lebanon track, took the lead from Brett LaFollette on the 16th lap and held off Looney's high-side charge at the finish. "Our motor company (Outlaw Racing Engines) has won bomber, factor stock, A-mod and B-mod features and this is our first Late Model feature win," Jackson said. "I'm really happy about that." — From track reports

BUREAU COUNTY PUSHES OPENER BACK: After discovering frozen ground just beneath the track surface recently, Bureau County Speedway officials have decided to push back the opening night at the Princeton, Ill., track. Officials didn't want to risk damaging equipment in trying to prepare the surface too soon. Opening night is tentatively scheduled for May 2. — From track reports

NORTH ALABAMA CANS WEEKLY PROGRAM: Because of a "lack of support" for weekly events, the track website said, North Alabama Speedway near Tuscumbia is switching to a special event schedule for the 2008 season. The next event is the $2,500-to-win Shoals Shootout on April 11. — From track reports

FAYETTEVILLE TO REPAIR WALL: Weekend rains forced Fayetteville (N.C.) Motor Speedway to race Sunday, April 6, but water was still a problem. Water seeped out of the frontstretch wall throughout the racing program, forcing drivers to stay 8-10 feet away from the wall and narrowing the racing groove on the frontstretch. Track co-promoter Ed Longhany said the track planned to fix the seeping problem this week, before the track hosts the Carolina Clash Super Late Model Series. Ricky Weeks won Sunday's feature. — Thomas Pope

THUNDER VALLEY PLANS UP IN AIR: The 2008 racing program at Thunder Valley Raceway in Central City, Pa., is up in the air following the death of track founder and owner Willie Will on March 12. Promoter Joe Padula reported on the track website that there's a dispute over the usage of the equipment to help prepare the track surface. Padula said he's working for a resolution and exploring options for using other equipment in hopes of keeping the track open. — From track reports

ODDS AND ENDS: Fast Trax Speedway in Chatham, La., announced it will run four Late Model events: May 4, May 25 (SUPR), July 5 (SUPR) and Oct. 25 for the Spooky 50. ... Macon (Ill.) Speedway added time trials to the UMP Late Model program for the 2008 season. ... Chris Wilson of Louisa, Ky., won April 6 at Clinton County Speedway in Alpha, Ky., for his first victory at the track. ... Royce McGowan, 46, of Faubush, Ky., is back racing for the first time in five seasons and plans to follow the O'Reilly Battle of the Bluegrass DirtCar Series.