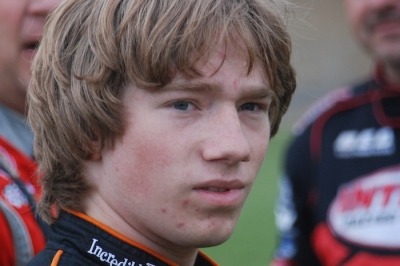 Over the past few years, the Dirt Late Model community has watched as Tyler Reddick has matured from a timid, bushy-haired pre-teen seemingly out of place in a sport dominated by older, more seasoned drivers to a confident up-and-coming racer often in contention at some of the sport’s biggest events.

The one thing nobody has ever seen Reddick do in his budding racing career is compete at the Eldora Speedway. | Complete Dream XVIII coverage

Since tackling the sport at the national level in 2009, Reddick has raced week in and week out with the sport’s top competitors, traveling around the country at first with the World of Outlaws Late Model Series and more recently with the Lucas Oil Late Model Dirt Series. But each season the young driver has had to sit out the two biggest races of the year—Eldora’s Dream and World 100—because of the track’s rule restricting anyone under the age of 16 from competing at the high-speed half-mile oval in Rossburg, Ohio.âEUR¨

Finally of age, Reddick will make his long awaited Eldora debut at this weekend’s $100,000-to-win Dream XVIII. As to be expected, Reddick is chomping at the bit to finally compete at dirt track racing’s ultimate proving ground.

“Ever since we got into Late Modes—or racing in general—I’ve always wanted to go to Eldora,” said Reddick, who grew up in Corning, Calif., before his family relocated to DuQuoin, Ill., for him to begin his stock car racing career in Late Models at the age of 12. “It’s a place everybody talks about and it houses a lot of big, crown-jewel events from sprint cars to Dirt Late Models.

“It’s a place where a lot of big things happen, and I’ve been waiting a long time to finally be able to race there. I’m really looking forward to it.”

Reddick enters the Dream weekend with just one Dirt Late Model victory to his credit. The initial triumphant came more than a year ago when Reddick pulled of an upset at East Bay Raceway Park’s Dart Winternationals, the Gibsonton, Fla., oval’s Speedweeks miniseries sanctioned by the Lucas Oil Series.

The breakthrough victory spurred high hopes for Reddick’s 2011 season. However, Reddick sputtered for the remainder of the year, going winless on his way to a 10th-place finish in the national tour’s final points standings.

On paper, Reddick’s 2012 first-half performance appears similar to his struggles of last season. In reality, Reddick has been much improved this year, but his results don’t reflect that due to poor luck in a number of events.

Even with poor finishes doting his 2012 results list, Reddick is confident strong finishes are on the horizon.“We’re getting closer, especially these last few weeks,” said Reddick, who currently sits ninth in the Lucas Oil standings. “We’ve been fast all this year, but we’ve had stuff break. Now that we’ve got out of the way and got new equipment under the car ... we’re not breaking as much and we’ve been able to run more consistently. I guess you could say we’re getting closer. The main thing we need is consistency. That’s the main thing you need to be competitive and win races because you’ve gotta finish.”

Competing at Eldora will be a completely new experience for Reddick. Not only has he never turned a lap at around the track; he’s also never stepped foot on the track’s facility.

Believe it or not, he says he’s never even seen a picture of the track.

“I was really wanting to go and watch some races there the past few years, but we’ve never really gone and just watch a race,” Reddick said. “I’ve never seen the place, never seen a picture of it or anything, but I’ve heard a lot about it. I’m really looking forward to going to that place. Sometimes it’s best to go in blind to places.”

Heading to Eldora without prior study may seem like a questionable strategy, especially considering that the track is often ranked among the toughest for young drivers to master. But Reddick is confident in his chosen approach. After all it has worked well in the past.

Reddick’s most recent first-time visit to a track came less than a month ago in a Lucas Oil Series event at Hartford (Mich.) Motor Speedway, a sprawling half-mile oval with similarities to Eldora.

Reddick’s Hartford debut started slow, but by the late stages of the main event, Reddick was chasing down leader Don O’Neal of Martinsville, Ind. Reddick closed to within just a few car lengths of O’Neal and was looking to make a winning pass before a tangle with a lapped car brought his stellar run to a disappointing end.

Still, the Hartford debut was a positive for Reddick, giving him confidence that he can unload his Bloomquist Race Car at any track in the country and be competitive.

“Hartford was a pretty big track and I had never seen it in my life. I had no idea what it looked like and we were pretty fast there,” Reddick said. “A lot of it is just how you come out of the box with the car. (Chassis builder and mentor) Scott (Bloomquist) generally gives a pretty good setup that works good pretty much wherever we go.”

Reddick hopes more victories come sooner rather than later. While most up-and-coming Dirt Late Model racers are taught to be patient in their expectations for career milestones, Reddick doesn’t have much time to wait.

With a looming transition to pavement racing and hopeful NASCAR stardom, Reddick knows his time competing full time in a Dirt Late Model is likely winding down. And with goals of winning more races, particularly major ones, before leaving the sport, Reddick knows he has to make good use of the time he has.

“There’s a little bit of pressure because we’ve got to move up soon and get more into the pavement stuff,” said Reddick, who has made two ARCA Racing Series starts this season. “We’re getting close where the end of the year might be it. We’re really hungry for another win and we’d like to win a crown jewel. That’s really important to me to win some more races and hopefully a big one before we move up.”

Reddick isn’t ruling out getting that big victory he so desires this weekend. While he’s not overly confident, Reddick believes winning the highest-paying annual Dirt Late Model race in his first try isn’t entirely out of the question, especially since he knows the feat has been accomplished in the past.

“I’m not expecting to go there and win, but you definitely can’t factor it out. Scott did that in his first time, you know, so it’s possible,” Reddick said, speaking of his mentor Bloomquist, who won Eldora’s 1988 World 100 in his first visit to the track. “But the main thing is we want to make the show. We’ve improved a lot and I think if we qualify good and have a good car there, we should be able to transfer. If we just get in, it’s a long race and who knows what could happen. You just gotta be there at the end.”