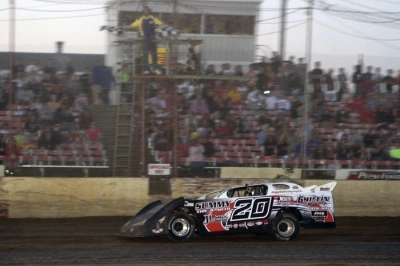 Like most Super Late Model rookies earning their first victory in the sport’s elite division, Dustin Griffin made sure to soak up all the excitement he could when he notched his first UMP Late Model victory May 13 at Quincy (Ill.) Raceways.

Even though it had only taken him five races to reach victory lane for the first time in a Super Late Model, Griffin worried he might have to wait a while before his next opportunity to enjoy the thrill of winning.

“I thought ‘Well, we better enjoy this one because we might not win another one all year,’ ” the 25-year-old driver from Camp Point, Ill., recalled of his breakthrough triumph.

Turns out Griffin didn’t have to wait very long at all to celebrate another victory in Quincy’s UMP Super Late Model division. He went back to Quincy the following weekend and scored a repeat win at the quarter-mile oval, surprising even himself.

“We won that first one, and you think that maybe you got lucky or something,” said Griffin, the 2011 UMP Crate Late Model Late Model champion. “I know we’ve been pretty good this year since we stepped up (to Super Late Models) but to come out and win two in a row like that, I guess I really wasn’t expecting that.”

Judging by the success Griffin experience over the past four seasons in the Crate Late Model division, his early victories in his rookie Super Late Model campaign are likely no fluke.

The higher speed of open-engine competition was, at first, a challenge for Griffin.

“There’s some different smaller things just to make everything work, but the biggest thing was just getting used to the speed and how fast everything was happening,” Griffin said. “The car feels the same and the same stuff was happening in the Crate, it just happened slower, it seemed like.

While Griffin appears to have got a handle on the increased speed of the Super Late Model division rather quickly, the transition has been far from all smooth sailing. Along with being plagued by mechanical issues in the first few races of the season, Griffin found he needed a new mental approach to his driving style in order to be more calm in the cockpit of his Pierce Race Car.

“When we first got going, I was trying too hard and going out there and worrying about what the guys I’m racing against were doing,” said Griffin, whose Xtreme Race Engine-powered race car carriers sponsorship from JL Scrap Metals, Summy Tire & Auto, Griffin Sign Company, AW Waste Services, Dennis Woodworth Attorney at Law. Little Jess Jeep.

Griffin has mostly stuck to running weekly on Sundays at Quincy so far this season with a few trips to Tri-City Speedway in Granite City, Ill., mixed in. Following his early-season success at the weekly level, Griffin hopes to branch out more during the summer months, including entering a number of UMP DIRTcar Summernationals events when the month-long tour comes to within a few hours of his western Illinois home.

“I’d like to run quite a few of the Summernationals races and see where we stack up against those guys,” Griffin said of the grueling 29-race tour that routinely attracts some the Midwest’s top regional competitors. “I’m not gonna go travel six hours to run the Summernationals, but I’d really like to hit all the races within three to four hours of home and especially the one at Quincy; I’m really looking forward to that one.”

His ventures on the Summernationals tour, along with other special events later in the season, will serve as a bit of a test for Griffin and his fledging Super Late Model program. If all goes well, the young driver hopes to hit the road more often in 2013, along with challenging for the UMP Super Late Model national championship.

“This year, we’re just worried about getting some learning and trying to keep it economical,” Griffin said. “I hope that this year we have a solid year so that next year we can hit it full force and go after a national championship or try to run more of the Summernationals or something on a little bigger scale. But right now it’s just all about getting as much experience as we can.”

• Despite having to start on the tail of the feature, hometown driver Stephen Breeding won May 25 at Mountain Motor Speedway in Isom, Ky., for his fourth straight victory at the track. He finished second in his his heat race but failed to cross the scales.

• Joe Armistead Jr. won May 26 at Senoia (Ga.) Raceway for his fifth straight Limited Late Model victory at the track.

• Derek Chandler of Pontiac, Ill., snapped a four-year drought with his May 26 victory at Fairbury (Ill.) American Legion Speedway.

• In a pair of dramatic victories, Ryan Unzicker of El Paso, Ill., had a two-victory weekend May 25-26 at Tri-City Speedway in Pontoon Beach, Ill., and Federated Auto Parts Raceway at I-55 in Pevely, Mo. Two frontrunners ran into trouble late at Tri-City while he edged Randy Korte at I-55, ending Korte’s two-race win streak.

AMRA: Reigning champion Chris Garnes of Evans, W.Va., leads the standings as of May 24 with a more than 100-point gap over Ronnie Mayle of Chesterville, Ohio. Andy Bond of Coolville, Ohio, is third with Freddie Carpenter of Parkersburg, W.Va., fourth with Dan Morrison of Newport, Ohio fifth.

NeSmith: A busy holiday weekend shook up the Crate Late Model organization’s standings with Brent Barrett of Cleveland, Miss., jumping to the lead after earning 50 bonus points from competing in a pair of touring events. While Barrett has earned the maximum number of bonus points, Shannon Lee of Lumberton, Miss., is just 11 points back in second with another 25 possible bonus points to be earned. Bobby Jordan McCarley, Miss., is currently third.

IMCA: Nate Beuseling of Silvis, Ill., leads the standings as of May 20, with a 13-point advantage over reigning champion Ray Guss Jr. of Milan, Ill. Tyler Bruening of Decorah, Iowa, is third with Darrel DeFrance of Marshalltown, Iowa, fourth and Matt Ryan of Davenport Iowa, fifth.

WISSOTA: Jake Redetzke of Eau Claire, Wis., continues to lead the standings as of May 26 while Mike Prochnow of Menomonie, Wis., is second after a victory May 25 at his home track Red Cedar Speedway. Aberdeen, S.D., racers Chad Becker and Curt Gelling are third and fourth respectively with Chad Mahder of Elk Mound, Wis., rounding out the current top five.

Among non-touring and independent special events Memorial Day weekend at dirt tracks around the country: