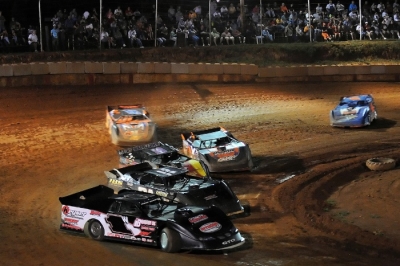 BRASSTOWN, N.C. (May 28) — In a battle of Florida drivers in North Carolina, Dillon Wood of Daytona Beach fought off repeated challenges from polesitter Ivedent Lloyd Jr. of Ocala for a $3,000 victory Monday at Tri-County Racetrack’s Circuit World Memorial Day Championships.

While Wood officially led all 40 laps from outside the front row, Lloyd was all over him most of the way, pulling inside, outside and once making a pass that was erased by a caution flag. | Video | Slideshow

Wood ran high early, dropped to the low groove, and ended up in the higher groove in turning back Lloyd in Super Late Model action at the Ray Cook-promoted 3/8-mile oval.

It was a two-car race most of the way with Jamie Oliver of nearby Murphy, N.C., grabbing the third spot after a long battle with fourth-finishing Tyler Millwood of Kingston, Ga., and Tony Knowles of Tyrone, Ga.

The night’s fast qualifier never was in contention. David Payne of Murphy had engine problems following time trials and started on the tail in a backup car, lasting just six laps before he retired.

Notes: Woods drives a Clements-powered Rocket Chassis sponsored by GW Performance, Keyser Manufacturing, Integra Racing Shocks and Bearden Oil Company. ... Wood became the fourth winner this season at Tri-County after Shane Clanton (April 6); Johnny Chastain (April 20 and May 4) and Jacob Grizzle (May 18). ... The race lasted about 25 minutes. ... Seven cautions slowed the action. ... George Mashburn and Shawn Chastain got crossed up in turn two early in the race. ... After Payne’s lap-six departure, Shawn Chastain slowed in turn two. .... On lap nine, a yellow waved for Mashburn again as debris fell from his mount. ... On the 14th circuit, Jason Payne slowed in turn three. ... The lap-18 yellow waved for Danny Ledford, who stopped in turn three. ... The lap-20 yellow was for Craig Burrows, who slowed on the backchute. ... Mashburn brought out the seventh and final yellow when he slowed in turn one. ... The track’s next Super Late Model special is the Sept. 3 Labor Day Championship.