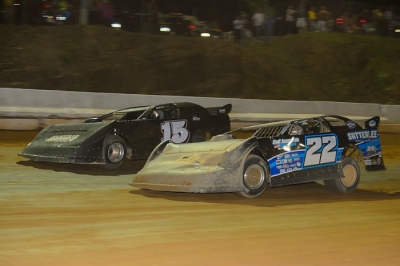 BEDFORD, Pa. (May 28) — Pole-starting Matt Parks of Three Springs, Pa., turned back a late charge by 18th-starting Gregg Satterlee of Rochester Mills, Pa., at Bedford Speedway for his first career victory on the Three State Flyers circuit. His Memorial Day victory at the 5/8-mile oval paid $3,000.

Satterlee settled for second with Dylan Yoder of Selinsgrove, Pa., in third. Tail-starting Jeremy Miller of Gettysburg, Pa., and Brian Booze of Marion, Pa., rounded out the top five. Front-row starter and hometown driver Jack Pencil wasn’t a contender after getting into the backstretch wall on the first lap.

The race got off to a slow start with Pencil’s accident and two more cautions before a lap was complete, including a grinding crash involving Eric Zembower and Walker Arthur.

When the field settled down, Parks was out front with Jeff Rine in hot pursuit. Rine slipped by to lead lap three, but Parks regained the lead a lap later.

Rine followed every move the leader made with Yoder in hot pursuit. Further back, Satterlee was on the move, breaking into the top five and moving up to fourth by the 12th lap. He took third from Yoder on lap 16 and quickly caught the frontrunners.

Satterlee zipped past Rine for second on lap 24, and Rine’s race ended moments later. Over the last 10 laps, Satterlee was all over the leading Parks. He could occasionally pull even but couldn’t make the pass.

A last lap charge fell short as Parks held on to take the checkers a length ahead of the runner-up.