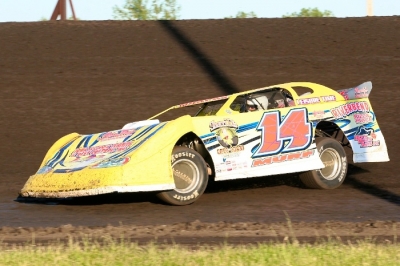 BOONE, Iowa (May 28) – At this rate, Mike Murphy Jr. is going to have to build a bigger display case. The Colona, Ill., driver added another Deery Brothers Summer Series trophy to his collection on Monday, leading all 40 laps of the Memorial Day feature at Boone Speedway. | Slideshow

The $2,000 IMCA Late Model tour victory, Murphy’s third of the season and career fourth, came despite the best efforts of Tyler Bruening and Jeff Aikey following a trio of restarts with two laps to go.

After drawing the outside row one start, the series point leader found the fast lower line and caught up to the back of the field by the 10th circuit.

Both Bruening and Aikey chased Murphy into lapped traffic. Bruening pulled alongside for a few laps but was never able to get past and settled in on the leader’s back bumper.

Laps clicked off quickly before the three late yellows, the last two of which involved multi-car incidents. Aikey tried a higher after the final restart but couldn’t catch Murphy or Bruening.

Notes: Murphy's No. 14 is sponsored by Sherri D's Auto Sales, Riverbend Pizza Place and Rock River Arms. ... Murphy is the only multiple winner through seven tour events this season. ... He’s also the 11th driver to win a Memorial Day feature at Boone in the last 12 years. ... Next up for the Deery Brothers Summer Series is the Tuesday, June 12 show at Cedar County Raceway in Tipton, Iowa. Pit gates and the grandstand both open at 5 p.m. Hot laps are at 6:30 p.m. and racing starts at 7 p.m.