Mistake-free Lowrey gets $5,000 at Santa Maria 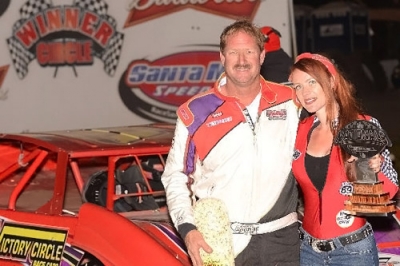 SANTA MARIA, Calif. (May 26-27) — In gunning for a career-high $5,000 payday Sunday at Santa Maria Speedway, John Lowrey of Bakersfield, Calif., couldn’t help but think of a near-miss earlier this season.

Lowrey’s chance at a prestigious Wild West Shootout victory in Tucson, Ariz., over the winter ended when a distributor failed while he was leading, but he didn’t want to blow this opportunity. | Slideshow

“I was just worried about messing up,” Lowrey said. “The only thing that can beat you is yourself.”

Lowrey made sure to avoid that in the West Coast Late Model Shootout event, starting on the front row and leading flag-to-flag for a victory in California’s richest race of the season.

Nick Bartels of El Segundo, Calif., scored a runner-up finish while Tony Toste of Pismo Beach, Calif., for his best career finish in a big-purse event. Mike Johnson of Lompoc, Calif., and Clay Daly of Watsonville, Calif., rounded out the top five finishers.

After dominating Saturday’s prelims, Mike Kirby of Torrance, Calif., started on the pole for the main event, but Lowrey got the jump on the former sprint car driver at the outset.

Jason Papich dropped Kirby to third after several laps of side-by-side action, then Papich drew close to the leading Lowrey amid traffic.

When Lowrey tried to go around the slower car of Carla Laney, Papich tried to go low and rear-ended Laney’s machine. The contact hampered Papich's steering and he spun in turn two, ending his night. Kirby inherited the second spot, but Papich’s teammate Toste got that position on lap 16.

Bartels then took third as Kirby began to fade, eventually slowing to draw a lap-22 caution with throttle problems.

Lowrey led Toste, Bartels, Johnson and Daly back to green, but Andy Obertello got the worst of a frontstretch scramble that brought out a quick yellow. Obertello headed for the hot pit for repairs, but brought out another caution on the restart as he spun exiting turn two.

Bartels moved in on Toste and took the second spot, and caution for debris with five laps remaining set up a dash to the finish. Lowrey continued without a mistake to take the checkers.

Notes: Lowrey drives a Victory Circle Chassis is powered by a Pro Power engine and sponsored by Premier Services and New Vision Graphics. ... Lowrey finished third in West Coast Shootout points in 2010, but this marked his first career series victory. ... Next up for WCS competitors is an Aug. 4 event at Calistoga (Calif.) Speedway.