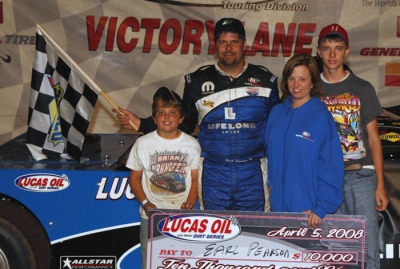 BRUNSWICK, Ga. (April 6) — Earl Pearson Jr. and Scott Bloomquist engaged in a tense staredown over a tire-rule dispute at Golden Isles Speedway in January. Three months later, the Dirt Late Model stars engaged in a last-lap showdown with Pearson coming out on top for a $10,000 victory on the Lucas Oil Late Model Dirt Series. "It feels great to come here and win in front of this amazing crowd," said Pearson, who was running fourth with 11 laps remaining in the 50-lapper. "I cut my teeth at this track and to come here and pass Scott Bloomquist is awesome.

Bloomquist, who started outside polesitter Terry Casey, led much of the early half of the race with little pressure before facing a few challenges from Jacksonville's Jason Fitzgerald. Fitzgerald took advantage of heavy lap traffic to apply pressure on Bloomquist. But Bloomquist extended his lead following a lap-28 restart as Casebolt took second from Fitzgerald. The second and final caution appeared for Shane Riner's turn-four spin, bunching the field at lap 38.

As the green waved, Casebolt charged into turn one, showing Bloomquist his car's nose. Pearson, up to fourth, moved by Fitzgerald on lap 39 and set his sights on Casebolt. Casebolt tried several different lines on Bloomquist to no avail.

With two laps remaining, Pearson overtook Casebolt on the outside but was still 10 lengths behind Bloomquist. As the field came to the white flag, the crowd was on its feet as Pearson had closed to the leader's rear deck lid. Bloomquist entered turn one hugging the bottom groove, and Pearson used the high side. With the momentum of the top, Pearson catapulted into the lead down the backstretch. Pearson exited turn four and took the checkered flag with cheers from the partisan crowd. Bloomquist, Casebolt and Fitzgerald, with his best-ever series performance, chased him across the line.

Notes: Pearson's Bobby Labonte Racing MasterSbilt Chassis is powered by a Larry Wallace Race Engine, and is sponsored by LifeLong Locks and Lucas Oil. ... Terry Casey maintains the series points lead with 1,070 points over Pearson (1,005) and Steve Casebolt (980). ... Fifth-finishing Bart Hartman advanced from 17th to earn the PBM/Erson Cams Hard Charger honors. ... The event was delayed a day by rain and wrapped up a three-race tripleheader in Georgia. Casey won the opener at Swainsboro Raceway and Scott James won at Screven Motor Speedway in Sylvania.