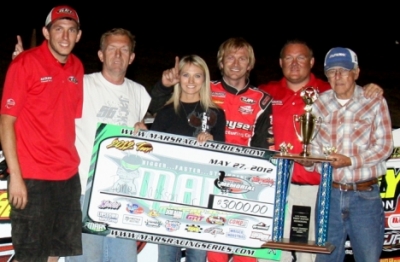 Justin Wells of Auroa, Mo., was second at the 3/8-mile oval in the southwest corner of Missouri with series points leader Jesse Stovall of Galena, Mo., finishing third. Will Vaught of Crane, Mo., was fourth with Matt Johnson of Archie, Mo., rounding out the top five. | Slideshow | MARS suspends Looney, Vaught

Vaught and Brad Looney of Republic, Mo., who was scored 15th, were involved in a postrace altercation after a last-lap incident while running among the top five. MARS on Monday handed five-race suspensions and banned them from racing at Monett for the rest of the season, the series announced. The disciplinary action was for "fighting, physical violence and threats of physical violence" according to series rules.