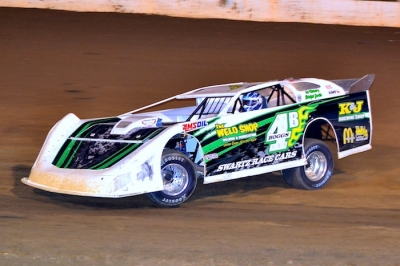 PORTSMOUTH, Ohio (May 27) — Jackie Boggs of Grayson, Ky., outdueled fast qualifier Josh McGuire in Sunday night’s inaugural Gator 50 and earned $5,000 for his second victory of the weekend and third straight at at Portsmouth Raceway Park. | Slideshow

Boggs, who earned also earned $3,000 for winning Saturday night’s Stars and Stripes 35 at Portsmouth, earned a guaranteed starting spot in the the $50,000-to-win Dirt Track World Championship scheduled for Oct. 19-20 at Portsmouth for his victory on Sunday.

Ben Adkins of West Portsmouth, Ohio, was fourth with Jason Montgomery of Jackson, Ohio, fifth in the event that was held in memory of former Portsmouth track owner Boone Coleman.

The event was marred by modified driver Dave McWilliams' scary flipping accident. McWilliams was airlifted from the track to a nearby hospital for evaluation.

McGuire was the only driver to break the 15-second mark during Sunday’s time trials.