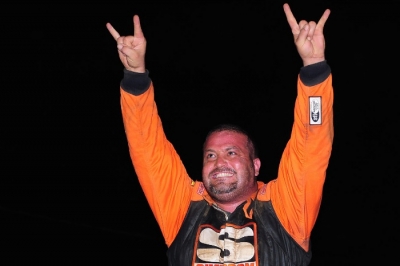 BURNSIDE, Ky. (May 27) — Fight off a few challenges amid traffic, outside front-row starter Chad Stapleton of Edinburgh, Ind., led all the way Sunday in Lake Cumberland Speedway’s McGowan Excavating 40, a tuneup for next month’s Lake Cumberland Classic. | Slideshow

Stapleton turned back bids by runner-up Dillan White of Crofton, Ky., for the $3,000 victory at the tight 3/8-mile oval for the richest victory of his career. Behind Stapleton and White, Michael Asbyerry of Crossville, Tenn., was third followed by Chris Combs of Isom, Ky., and Jeremy Hines of Seymour, Ind.

Polesitter Aaron Ridley of Chatsworth, Ga., and Stapleton led the field to the green flag with Stapleton getting the jump on Ridley, White, Victor Lee and Asberry. The top five held until Steve Elliott’s lap-eight spin drew the first yellow.

White went to work on Ridley on the restart, taking the second spot on lap 14 and chasing down Stapleton amid traffic before Elliott rolled to a stop in turn one for another caution.

With Stapleton and White pulling away, Asberry took the third spot on lap 33 when Ridley got into the wall, slowing moments later for a lap-35 yellow. Another quick caution appeared when 16th-starting Dustin Neat, up to fifth, spun in turn three.

Stapleton kept White in check the final laps to wrap up the victory.