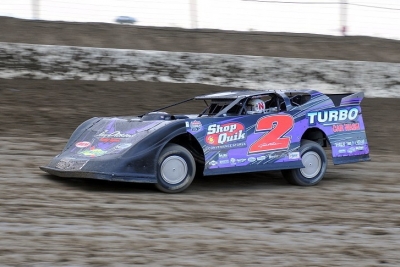 “Me and Chad had a good race there. I was just kind of biding my time there at the start of the race, waiting until we could make some moves. It’s a lot easier when you’re in second there to move around and hopefully find the line to get by.”

Anderson took the checkers ahead of Kyle Berck of Marquette, Neb., while Simpson ended up third. Denny Eckrich of Tiffin, Iowa, came from his 13th starting spot to fourth and 15th-starting Jason Rauen of Farley, Iowa, rounded out the top five finishers.

“Late there, I’d seen the (Berck’s No. 14) on the board, and I know he’s really good on the bottom here all his life. I just had to cut good, consistent laps,” Anderson added. “I knew it was a good race and I just had to hit my marks.”

Anderson notched his third MLRA victory of the season in taking the points lead, and the second Corn Belt Clash victory of his career.

Simpson jumped into the lead from outside the front row and led comfortably early while Anderson joined him in pulling away from the pack. Anderson was within striking distance at halfway, and when he made his winning move, he slipped inside Anderson down the backstretch.

Simpson valiantly tried to fight back on the next lap, staying side-by-side with Anderson entering turn one. But amid that battle, Simpson came together with the lapped car of Brian Kenkel, allowing Anderson to complete the pass and head for victory.