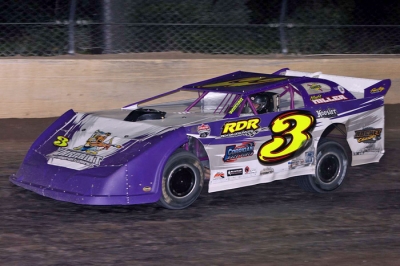 ROSSBURG, Ohio (May 27) — Matt Miller made it two in a row on the Sunoco American Late Model Series and two in a row in at Eldora Speedway’s Memorial Day weekend special with Sunday’s victory at the historic half-mile oval.

Miller, fresh off a victory at Ohio’s Oakshade Raceway the previous night, captured Eldora’s Johnny Appleseed Classic by Miller Lite, leading all but one lap for the $2,000 victory. | Slideshow

Steve Casebolt of Richmond, Ind., finished second while Jeep Van Wormer of Pinconning, Mich., was third. Jeff Babcock of Wayne, Ohio, and eighth-starting Scott James of Lawrenceburg, Ind., rounded out the top five. Canadian invader Andrew Reaume started on the pole and led the first lap, but he faded to finish ninth.

Miller, who won last year’s event in his former McCullough Motorsports ride, continued a string of early season success in the No. 3 Rocket Chassis of Rick DeLong, a fellow driver from Whitehouse, Ohio, with an ailing back who gave up the seat to Miller this spring. DeLong joined Miller in victory lane to celebrate the victory that comes two weeks before the $100,000-to-win Dream, a race Miller won in 2005.

Miller started outside the front row, but Reaume shot into the lead at the outset of the 25-lapper. On a lap-two restart, Miller overtook Reaume, who fell back to fourth behind Babcock and Van Wormer. Casebolt then made his big move, going from fifth to second during a one-lap stretch.

Casebolt kept Miller in his sights and took a crack at the lead on lap 16, but Miller maintained his poise and the lead the rest of the way.