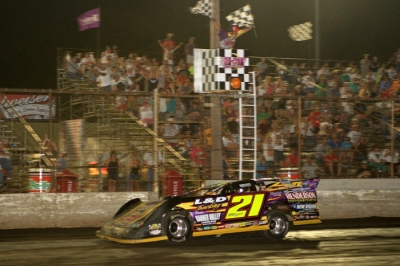 PONTOON BEACH, Ill. (May 27) — Billy Moyer of Batesville, Ark., swept around Jimmy Mars on the backstretch on the 32nd lap Sunday at Tri-City Speedway en route to a $10,000 victory in the Budweiser 50.

Moyer stalked frontrunners Steve Francis and Mars through the first half of the race, but moved up to challenge the leading Mars by lap 30 and made his winning move on the icy-slick surface. | Slideshow | Video

“When it gets like that and you’re trying to walk on that ice cube, one little break in the momentum really makes a big difference,” Moyer said. “Everything just happened just right there where I got into the corner good.”

Moyer edged away the remainder of the 50-lapper and cruised to victory in the non-touring UMP DIRTcar-sanctioned event.

The pole-starting Mars, who went ahead of fellow front-row starter Francis for good on the 21st lap, posted a runner-up finish while Brian Birkhofer of Muscatine, Iowa, was third. Francis, of Ashland, Ky., was fourth and Brian Shirley of Chatham, Ill., rounded out the top five in a race slowed by a single caution.

Francis and Mars ran side-by-side much of the first half of the race with Francis leading most of the way on the outside as Mars dipped underneath. Just behind them, Moyer and Birkhofer shadowed their every move.

As the frontrunners entered slower traffic, Mars dispatched of Francis and Moyer followed suit, taking the second spot before the halfway point.

While Moyer was able to outrun Mars the rest of the way, the Menomonie, Wis., driver was pleased to get back on the right track after recent struggles.

“My confidence level is about in the tank right now. I’ve just been running off base for a little bit. I kind of went back to square one and everything felt good,” Mars said. "I probably was a little bit too cautious out there, but he’s always run good here, so I guess just to hold ‘em off as long as I did, I felt like that was a win to me. I think we’ve definitely got something that we’ve got working again.

“We pretty much left our car alone tonight and never touched it ... instead of going out there and throwing a million things at it. Everything felt good. Sometimes a person overadjusts, and I’ve learned that the last couple of weeks here.”