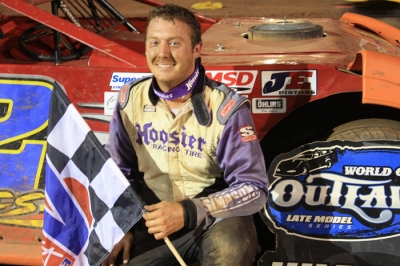 Chris Garnes shocked World of Outlaws drivers with a victory at I-77 Raceway Park. (Kevin Kovac)

RIPLEY, W.Va. (May 27) — Chris Garnes of Evans, W.Va., pulled off one of the biggest upsets in World of Outlaws Late Model Series history, shocking the touring stars with a convincing run to victory in Sunday’s 50-lap Ripley RaceFest at I-77 Raceway Park. | Video

The 25-year-old talent ran the race of his life, dominating his reconstructed home track’s first-ever WoO event after inheriting the lead when a shorted-out battery caused Steve Shaver of Vienna, W.Va., to slow on a lap-five restart. He was never challenged during the 45 laps of uninterrupted green-flag action that closed the race.

With a growing resume that features Dirt Late Model points titles at I-77 in each of the last two seasons, Garnes entered Sunday’s program with plenty of confidence in his ability to battle the high-profile invaders. But he still struggled to grasp the enormity of his accomplishment after rolling his 2011 Swartz car, which he co-owns with his father, into victory lane before a loud partisan crowd.

“I don’t know what to say,” said an awed Garnes, whose only previous WoO appearance came in 2009 and resulted in a DNQ. “(Winning a national event is) something that every local kid thinks of whenever they’re growing up and racing at these no-name tracks that nobody knows of. Maybe it’ll soak in here in about a year or two.”

Garnes, who started from the outside pole and led laps 1-2 before Shaver took over for a brief stint at the front of the pack, cruised under the checkered flag 2.827 seconds — nearly a full straightaway — ahead of Chickamauga, Ga.’s Dale McDowell. The former WoO regular grabbed second place from Vic Coffey of Caledonia, N.Y., on lap 13 but couldn’t put even a slight dent in Garnes’s edge over the remaining distance.

Tim Dohm of Cross Lanes, W.Va., who won I-77’s season opener on May 12, finished third. Chub Frank of Bear Lake, Pa., was the highest-finishing WoO traveler after pounding the extreme outside of the 3/8-mile oval to move from the 11th starting spot to fourth at the finish, and defending WoO champion Rick Eckert of York, Pa., hustled forward from the 13th starting position to place fifth.

Garnes, who won a weekly feature at I-77 on May 19, became the 46th driver to win a WoO feature since the circuit was restarted in 2004 under the World Racing Group banner. He also joined a select group of local-level competitors who have managed to capture a WoO event at the track closest to their home.

“It just makes me proud to bring this big of a race back to the local community,” said Garnes, who lives less than 15 minutes from I-77 and, of course, began his dirt-track career there in 2001 as a 14-year-old in the Semi-Late division and has been a regular in the Dirt Late Model class since ’05.

Garnes, who celebrated his 25th birthday on May 23, demonstrated a cool approach on Sunday, refusing to allow any pressure — on and off the track — to derail his efforts.

“Everybody else was pumped up and excited,” Garnes said of the family members, crew members and friends who support his racing. “I would think people would try to calm me down before a race, but I was the one telling them, ‘Let’s just go do what we do every night. (The stars are) here, but just ignore them. They’re all just another car on the track. Let’s just run our own race and do what we do every week and see what happens.’”

The result was an unforgettable performance by Garnes, who earned a career-high payoff of $10,550, including a $500 bonus for being the highest-finishing driver who had never won a WoO event and wasn’t ranked among the top 12 in the points standings.

“I was just trying to give everything I had and get as many lapped cars between me and whoever was behind me,” Garnes said of his strategy once in command. “I seen a blue and white car stick his nose under me, but I didn’t know if it was a lapped car or second place so I started hugging the bottom a little bit tighter those last five, eight laps.”

McDowell, 46, had no success running down Garnes with his Team Dillon Warrior machine and hailed the upset victor afterward.

“They said he runs here a little bit, so he’s obviously taken good notes,” said McDowell, who started eighth. “I think the rest of us were a little bit different on tires. I think he was a little harder than we were.

“It was kind of crazy to think hard tires would be the way to go (in the feature), because the heat races were all won on soft tires, and then the consy was soft tires and the times didn’t really fall off. But once the racetrack cleaned up and got shiny all the way across, he was better. He made the right call.

“And good for him,” added McDowell. “I know how he feels. I remember when I used to race around home and those big guys would come in and I’d get a shot to compete with ‘em. Beating them was the biggest deal in the world.

“Congratulations to him. He had a great night. I hope he celebrates big.”

Dohm, 51, also had high praise for Garnes after steering his self-owned MasterSbilt car to a career-best WoO finish of third.

“He does good on the slick tracks here every week,” Dohm said of Garnes, whose car carried an engine built by Pro Power Performance of Beckley, W.Va. “He wins the track championship here and over at Skyline (Raceway in Stewart, Ohio), so it’s good to see him win tonight. I wish it was me, but if it wasn’t me, I wish it were my son Zack (Dohm) — and if it wasn’t him, I’m glad to see one of the guys who race here every week do it.

“He earned it. He was gone. He was fast. Shaver might have had something for him, but he did what he needed to do. It was a heck of a run. My hat’s off to him.”

Three caution flags slowed the race, all in the first five laps.

WoO points leader Darrell Lanigan of Union, Ky., saw his bid for a sweep of the tour’s three-race holiday weekend end with a sixth-place finish. He started 19th after failing to qualify through a heat race for the first time this season (he won the B-Main) and battled forward to put himself in the mix for a top-five run.

Tim McCreadie of Watertown, N.Y., ran as high as fifth but settled for a seventh-place finish — the same position from which he started. Rick Williams of Beckley, W.Va., made a strong advance from the 16th starting spot to place eighth, Coffey was ninth after climbing up to second early in the distance and polesitter Walker Arthur of Forest, Va., slipped to 10th in the final rundown.

WoO competitors return to action May 31, with a trip to Delaware International Speedway in Delmar for the running of the Fulton Bank 50.