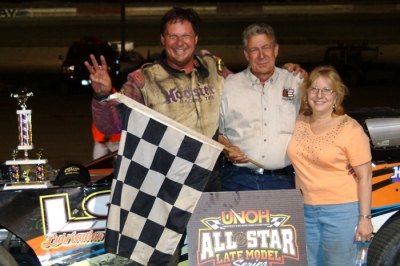 MILLERSBURG, Ohio (May 26) — Fast qualifier George Lee of Loudonville, Ohio, made a mid-race pass for the lead and cruised to victory Saturday at Hilltop Speedway, earning $5,000 for his first success on the UNOH All Star Late Model Series. | Slideshow

Lee slipped under Ryan Markham of Ashland, Ohio, a few laps after a lap-19 restart and stayed in control the remainder of the 40-lap special event. Sammy Stile of Charleroi, Pa., rallied from his 14th starting spot into second, but couldn’t catch Lee in the race’s final stages.

Markham jumped into the lead at the outset over Shane McLoughlin and Hornikel with Mike Lonas and Lee just behind. Markham used the low groove to lead the first 15 laps while the quartet mixed it up behind him.

After a caution for Aaron Phillis, Markham stayed out front while Hornikel and Lee dropped McLoughlin to fourth. Another quick yellow appeared on the 19th lap for Mike Graber and Eric Smitley.

On the restart, Lonas drove into turn one to take second, and Hornikel’s slight turn-two bobble allowed Lee into third. Lee took second from Lonas on the next lap, and two laps later, he surprised Markham with an inside pass to take command.

Stile moved into the top five, but with 15 laps remaining Lee opened up his lead with Hornikel, Markham and Stile giving chase. McLoughlin and Lonas began to fade from contention while Drown worked his way into the picture.

Stile took second from Hornikel on the 30th lap, and while he gained some ground on the leader, he didn’t have time to make a serious run. Drown squeezed past McLoughlin for fifth with four laps remaining.

Notes: Lee’s No. 61 Rocket Chassis has a Malcuit engine and sponsorship from Cowen Truck Line and LSI. ... Lee has three victories at Hilltop this season and 17 in his career. ... The event will be televised by SportsTime Ohio. ... The track’s Late Model division is sponsored by Holmes Tire. ... No other races are listed on the All Star Series schedule. ... The next Late Model special at Hilltop is a $3,000-to-win event for American Dirt Racing Association cars on July 14.