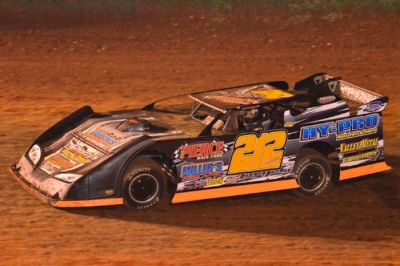 SUMMERTOWN, Tenn. (May 26) — Josh Putnam of Killen, Ala., earned $3,000 Saturday at Thunderhill Raceway in the unsanctioned Danny Sandrell Memorial.

Starting outside the front row, Putnam comfortably led all 40 laps of the caution-plagued feature in outrunning runner-up Tanner English of Benton, Ky. | Slideshow

The race was held in memory of the late Danny Sandrell, a long-time regular in Thunderhill’s Late Model division. In victory lane, Putnam was joined by his sister Jan while dedicating his victory to the late driver.

Notes: Putnam’s Pierce Race Car is powered by a Burns Racing Engine and sponsored by Hy-Pro Race Fuel & Parts, Miller’s Body Shop and Shorty’s Motorsports. ... Putnam was the fast qualifier but elected to start outside the front row. ... Runner-up Tanner English also drove a Pierce Car; he started on the pole. ... Besides several cautions for incidents, there was also a long delay when the track ambulance was called away to a highway accident. ... Stacey Tyler and Trent Letson were the only two Super Late Model drivers who didn’t start the main event. ... A.J. Ferguson won the feature for Limited Late Models and Crates, earning $1,000 while driving a new Pierce built by Putnam. ... Thunderhill’s next Super Late Model special is a $3,000-to-win event on June 30.