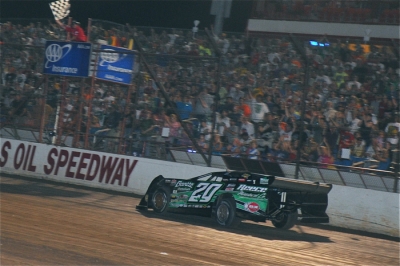 The polesitting Owens led the majority of the event, but scoring the victory was far from easy for the reigning Lucas Oil Late Model Dirt Series champion and current series points leader. Owens, 40, survived a number of close calls when he jumped the cushion and nearly hit the wall multiple times while also turning back a handful of challengers who took turns pressuring the leader.

Owens twice lost the top spot during the 100-lap race, but he battled back each time on his way to winning for the second consecutive week on the Lucas Oil tour. He was followed at the finish by John Blankenship of Williamson, W.Va., and Dennis Erb Jr., of Carpentersville, Ill. Austin Hubbard of Seaford, Del., rallied from the last starting spot in the 29-car field to finish fourth with three-time Show-Me 100 winner Billy Moyer of Batesville, Ark., rounding out the top five finishers.

“It was a handful,” Owens said of his battle to keep his car under control and his challengers at bay. “The cushion was treacherous. You’d go in and get tractioned up and you loose the nose and catch the nose. We had something going bad in the car there ... but we held on and got the win. Those guys slipped by me a couple times, but I guess you got to finish.”

There were multiple times throughout that race when it appeared Owens might not make it to the finish. The handling on his Bloomquist Race Car appeared to become progressively worse as the race wore on after his first sign of struggle came on lap 38, when he jumped the cushion getting into turn one and nearly hit the wall.

That was the first of many bouts with cushion Owens had to survive on the 3/8-mile oval’s high-speed surface. Later in the race, turns three and four became more of problem for Owens, where he frequently pushed through the middle of the corners, then turned sideways at the exit.

But Owens successfully reigned in his race car with each misstep and continued to protect the racetrack’s preferred high groove. And as treacherous as riding the cushion was, abandoning the top line wasn’t an option for Owens.

“If you didn’t enter on the cushion, you had to slide so far to the cushion and you didn’t have no traction off,” said Owens, who also won the previous week in Batesville (Ark.) Motor Speedway’s Bad Boy 98. “You had to use the cushion the whole race, and in three and four I just never could get a good groove going down there. I would run a good line three or four times and then I’d push and about knock the wall down. It was just a demanding racetrack tonight, and we were able to hold on.”

Besides surviving the tricky surface, Owens also had to fend off a number of stout competitors. His first challenge came from sixth-starting Tyler Reddick of Corning, Calif. The 16-year-old Reddick powered to the second position within the first 10 laps of the race and appeared to have one of the fastest cars on the track.

Reddick quickly ran down Owens after moving to second and began to apply heavy pressure as the two leaders raced through lapped traffic. But Reddick’s bid for his first crown jewel victory went up in smoke when his engine let go to bring out the race’s first caution with 16 laps complete.

Five-time Show-Me 100 winner Scott Bloomquist of Moorseburg, Tenn., was the next driver to hold the second spot, but he never mounted much of challenge for Owens during the early going.

Owens didn’t have much time to relax, however, as a hard-charing Jared Landers of Batesville, Ark., completed a 26th-to-first run with a pass of Owens for the lead following a lap-49 restart.

But nearly as soon as Landers took the top spot, a power steering fluid leak caused his Clint Bowyer Racing entry to begin pouring smoke. The effects of the fluid leak became evident when Landers began to struggle to keep control of the car just a couple laps later.

Landers and Owens nearly collided when Owens pulled alongside and retook the top spot on lap 52, but Owens avoided Landers' sideways car and pulled back ahead while Landers faded and eventually limped to the pit area.

Bloomquist moved back to the second position following Landers’ demise, and this time presented a more suitable challenge for Owens. Bloomquist stayed close to Owens through the middle stages of the race and looked under the leader a number of times whenever Owens bobbled.

But Bloomquist never made a strong enough run to take the lead before his chances of winning also dissipated when he jumped the cushion getting into turn one follow a lap-75 restart and made heavy contact with the wall.

Eighth-starting Erb then assumed the second position following Bloomquist’s departure, using a lower line on the racetrack to pressure Owens, who continued to struggle.

A caution on lap 89 gave Erb a chance to make a move on what proved to be the race’s final restart, but he was prevented by third-running Blankenship’s charged by both Erb and Owens with a slidejob into turn one.

Blankenship’s momentum carried him too high, sending him over the cushion and allowing Owens to use a crossover move to retake the lead down the back straightaway. Blankenship recovered in time to maintain the second position, but he never got close enough to try another move on Owens and settled for the runner-up finish.

“I knew when the threw the green I couldn’t take off,” Owens said of the race’s final restart. “I didn’t have no traction down the straightaway. The car wasn’t going and I could hear (Blankenship) beside me. I was pretty confident what was gonna happen (in turns one and two), and so I just prepared myself and as soon as I saw him go by, I did the crossover move and luckily he jumped the cushion a little bit. If he hadn’t done that it’d been his race to win.”

Blankenship missed out on grabbing what would have been the biggest victory of his career when his lap-89 slidejob failed, but he equalled his best finish of the season on the Lucas Oil tour.

“I showed (Owens) a little bit of courtesy and dove in real shallow,” Blankenship said of his entry into turn one following the restart. “I knew he would let up and probably just drive right back under me, but I had to give it a shot. I got a good enough jump coming off four and hit that moisture. I just figured I had to try it.”

Erb had a move of his own in mind on the restart, but the charge by Blankenship prevented him from giving it a try and dropped him to third at the finish.

“We got to second and could race with them a little bit when I was working that middle (groove) in (turns) three and four,” said Erb, who scored his first top-five finish in Lucas Oil action since the tour’s season-opening mini-series at East Bay Raceway Park in Gibsontown, Fla. “I really thought we had a shot at it, but the caution came out. I chose the outside (for the restart), hoping to get a run, but John came up there and kinda mixed us all up there. There was really nothing we could do; that top was really fast.”

Hubbard, who was making his first visit to Lucas Oil Speedway, recorded his second top-five and third top-10 finish in the Lucas Oil tour’s past four races with his fourth-place effort. The fourth-starting Moyer struggled with the handling on his Victory Circle Race Car for much of the race, but managed to hold on to fifth spot to notch his first top-five Show-Me 100 finish since 2007.