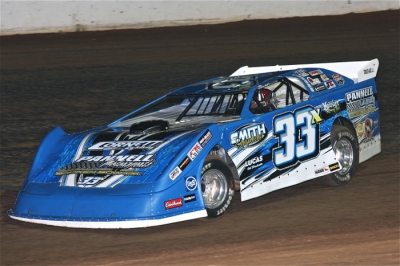 WHEATLAND, Mo. (May 25) — Entering just his second event of the season, Eric Turner of Springfield, Mo., knew he needed to make the most of Thursday night’s Dart Show-Me 100 practice session at Lucas Oil Speedway.

He did just that, knocking the rust off his driving skills and getting his Pannell Motorsports Rocket Chassis dialed in with help from setup guru Gary Winger of GW Performance. | Complete Show-Me 100 coverage

Thursday’s work paid off nicely for Turner during Friday’s preliminary action for the Lucas Oil Late Model Dirt Series event, as he finished second in the first of four 20-lap heat races to earn a starting spot in Saturday’s $30,000-to-win main event.

"Getting out here and making laps (Thursday night), that was a huge help,” said Turner, who was busy working as a representative for Roush Yates Engines the first half of the season. “We made some adjustments to our shocks with Wingar, and he actually picked us up about a tenth of a second during practice. That was a big help. We were still a little off of (heat winner) Jimmy (Owens), but we know we're at least in the ballpark."

Now that he’s accomplished the task of making Saturday’s feature lineup, Turner’s looking forward to relaxing Saturday while those not already in the show worry with attempting to make the show through consolation races.

However, he won’t be relaxing too much. He’ll also have to decide what to do on tire selection for the extra-distance feature race.

"It's a pretty big relief to be in the show and get to kick back and relax with the big boys,” Turner said. “I guess that’s good cause it gives us more time to figure out what to do about tires. We've already been talking about the four or five we've got to choose from, and tread patterns, siping, grooving, how far can we go, how they were wearing tonight, all that stuff.”

Turner, who isn’t accustomed to racing such long distances, said he plans to tap the experience of some of his fellow competitors for advice on his tire choices, although he knows he’ll have to be careful about who he trusts.

“I’m not real sure what we should do. I'm gonna walk around the pits and ask questions tomorrow and kinda see where I need to be at on that," Turner said. "I'll probably get a variety of input from these guys. Some of these racers, they’ll lie to ya. I’ve been figuring that out, so I know I better get a good group of opinions and then take the best of them.”

Kevin Sather of Ankeny, Iowa, and Will Vaught of Crane, Mo., both earned feature starting spots through the fourth heat race, but both driver's pit crews were left with extra work to get done before Saturday's feature from a last-lap heat race tangle between the two drivers.

Sather, a Super Late Model rookie, was running third on the final lap of the prelim when Vaught, who had pressured Sather for much of the closing laps, got a strong run up high as the two drivers exited the final corner. As Vaught carried out his run, Sather slid up and the two drivers hit at the flag stand, leaving Sather with heavy right-side damage from contact with the wall and Vaught with significant front-end damage.

Neither driver was happy about the incident, and of course, they had differing views on who was to blame. Vaught said he thought Sather knew he was there on the high side and should have given more room.

"I had a pretty good run on that boy and I thought he might've saw me," Vaught said. "I was just trying to get a couple more rows there for the feature start. We were a lot better than him; he was holding us up for about five laps."

Sather, on the other hand, said he didn’t know Vaught was above him, adding that he felt Vaught’s move wasn’t very smart when both drivers were already in transfer positions.

"I was just about to cross the line and was like 'I just made the Show-Me 100' and all of sudden I get turned into the wall," said Sather, who after the race was worried the rear-end in his race car may have been bent in the wreck. "If he wanted it that bad, I would've gave it to him to not tear our stuff up, but I don't know what he was thinking. It's a long race tomorrow and it's really not gonna matter where you start. I felt like it was a bonehead move. I would've left off."

Even with the setback from the crash, Sather was excited to make the main event in what one of the best showings of his young career.

"I didn't think I had a shot at (making the feature)," Sather said. "We just came to have fun, learn some stuff and race with some good drivers. We put down a good qualifying lap and got a good start in the heat race. The car was good.

“I really can't believe it. It's the biggest race I've ever made. We’re gonna get her put back together and give it our best shot tomorrow.”

Steve Francis of Ashland, Ky., started Friday night's action on a positive note when he topped the second of two qualifying groups during time trials. But even with his strong qualifying run, Francis knew his Barry Wright Race Cars house car wasn't as good as it needed to be.

That showed during the heat race, when Francis faded from the pole to a fourth-place finish, barely earning a transfer into Saturday's feature.

"We aren't as good as we need to be," Francis bottom-lined following his heat run. "We just got into the racetrack where nobody else was in qualifying and that helped us there. We aren't where we need to be yet."

Francis was confident he and his crew could get his race car better for Saturday night's main event.

"These guys work hard. We'll come up with something and get better for tomorrow night," Francis said. "We can get back up there. We just gotta get our car decent. You can pass here. We've just got to get our car like we need it."

While there was plenty of good racing action throughout the heat races, most of it was for second on back. The only heat race that featured a battle for the lead was the second heat, which saw Tyler Reddick of Corning, Calif., make a run at polesitter Scott Bloomquist of Mooresburg, Tenn., midway through the race.

"Scott was kinda looking around and he made a couple mistakes that allowed me to catch up,” Reddick said. “I was just searching around on the bottom of the racetrack and we were working pretty good there, but I knew it was starting to slow down coming off the corners."

After the two drivers battled side-by-side for a number of laps, Reddick briefly took the lead from Bloomquist to lead lap 12, but Bloomquist pulled back ahead the following lap after moving to the top of the racetrack and reclaimed the spot for good.

Reddick settled for the runner-up finish and was happy with the performance of his race car.

“The car's really good, so maybe we can get up front with those guys (in the feature), Reddick said. "I felt like I could move around good. ... We just need to make a few changes probably to help.”