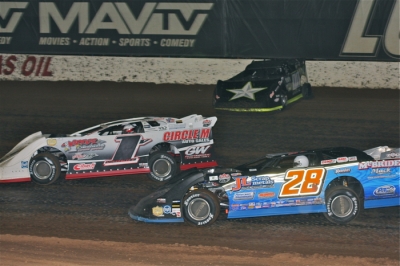 A run-in between Jesse Stovall of Galena, Mo., and Dennis Erb Jr. of Carpentersville, Ill., in the fourth heat race led the list of Friday night's scuffles with the two drivers each blaming the other for an incident that left Stovall on the outside looking in for Saturday's main event.

The seventh-starting Stovall had charged forward with an impressive high-side rally early in the 20-lap prelim and joined Erb in catching Brad Looney of Republic, Mo., and Will Vaught of Crane, Mo., to make it a four-car battle for the third position as the the race neared the midway point.

Stovall made multiple strong runs alongside the low-running Erb as both drivers looked for a way around Looney. But when Stovall attempted to pass Erb on the top down the back straightaway on lap 10, Erb appeared to slide up into Stovall's line, causing contact that flattened Stovall's left-rear tire and sent him spinning in turn three.

"Disrespect's what happened there," said Stovall, who after pitting to change tires, made another high-side rally to finish sixth, two spots out of a feature transfer. "I'm a regional guy and he's the big shot in town. They just don't respect us small-time guys or whatever they call us.

"I thought he was a better ole boy than that. Maybe he just screwed up, but I went over there and talked to him and he acted like it was my fault. I don't think it was any part my fault. I was racing and got in there tight, but you can get in there and race tight with these guys because I respect these guys and don't think they're gonna do things like that."

Meanwhile, Erb, who went on to finish second in the race, pointed the finger at Stovall, blaming lack of patience on his part.

"You got two cars in front of ya that's taking up the racetrack, but he put it in there and squeezed in," Erb said. "He drove over my nose and cut his rear tire down. You gotta be patient for a little bit. I mean, heck, I was faster than them guys, too, but I wasn't gonna go blasting through there. You gotta use your head a little bit."

Stovall didn't agree with Erb's sentiment, adding that he was taking his time in moving forward.

"I knew it was 20 laps and that's about like a feature in some of these local and regional races," said Stovall, who entered the race third in the standings on the Lucas Oil MLRA tour, which co-sanctions the race with the Lucas Oil Series. "I was trying to bide my time, but sometimes I guess you get the bad end of the stick."

The only good news for Stovall from Friday night was that Vaught, the MLRA points leader, transferred to the main event by finishing fourth in the heat race, guaranteeing Stovall one of the MLRA tour's two provisional starting spots. Even with the provisional in hand, Stovall plans to do his best to transfer through his consolation race Saturday.

"I'm planning on going out there in the B-feature and running up front and making the show that way," Stovall said. "In a big race like this, it's a lot better that you raced your way in and not out here taking a freebie. Plus, we've got a really good race car, and the closer we start to the front the better a chance we have of getting up to the front like I think we're capable of doing."

Set to start eighth in Saturday’s main event, Erb will have a much easier road to the front in the 100-lap feature.

“We have a real good car and we were able to pass pretty good there in our heat race,” said Erb, who advanced four positions in the heat race after starting sixth. “Hopefully we’re just as good tomorrow and if the track’s good again, I think we’ll have a shot to move up.”

Other run-ins during Friday's heat race action included an incident between Kevin Sather of Ankeny, Iowa, and Vaught at the finish line later in the fourth heat. Contact between the two drivers sent Sather hard into the wall as he crossed the line third while Vaught also tagged the wall in crossing the line fourth. Ronny Lee Hollingsworth of Northport, Ala., spurred another tangle in the third heat when he got into the back of former Show-Me 100 winner Terry Phillips of Springfield, Mo., as the two battled for the fifth position.