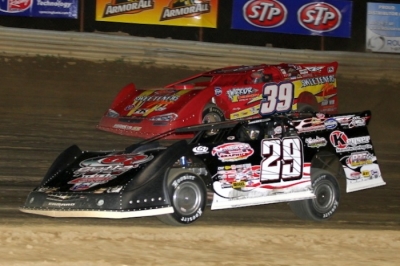 The former series champion overtook McCreadie for the lead on the 47th of 50 laps and rolled on to his third triumph of 2012. No other driver has won more than once through 12 events this season.

“We’ve been running good, but it’s been a while since we won,” said Lanigan, who entered Friday’s action with nine top-five finishes but winless since topping the first two races of the ’12 WoO campaign in February. “It feels good to get back in victory lane.”

Lanigan, who turns 42 on June 3, worked hard for his 29th career WoO triumph, a score that gave him sole possession of second place on the national tour’s win list since 2004, breaking a tie with Steve Francis of Ashland, Ky. He started seventh and needed nearly the entire distance to reach the front of the pack.

After hustling his Rocket machine up to fourth by lap seventh, Lanigan ran in the position until passing early leader Walker Arthur of Forest, Va., for third on lap 30. He inherited second when WoO rookie Bub McCool of Vicksburg, Miss., retired during a lap-32 caution period due to a broken rear axle and then took up the chase of McCreadie.

McCreadie, 38, appeared primed to register his second win in the last three WoO events after grabbing the lead from Arthur on lap 22, but he struggled after the race’s third and final restart, on lap 41, and was unable to hold off Lanigan.

Lanigan flashed under the checkered flag 1.562 seconds ahead of McCreadie, who steered the Sweeteners Plus Warrior to his third consecutive finish among the top four.

Fifth-starting Chub Frank of Bear Lake, Pa., rallied to place third in his Rocket after falling as far back as eighth. McCreadie’s teammate, Vic Coffey of Caledonia, N.Y., advanced from the 14th starting spot to finish fourth in a Rocket car and Arthur, who started second and led laps 1-21 in his first-ever start at Wayne County, settled for a WoO career-best run of fifth driving a MasterSbilt Race Car.

“There at the end our tires came in a little bit better,” Lanigan said of the key to his $10,650 victory. “We had a little bit harder tire than they did. They faded, and we got better.”

Lanigan’s patience paid off in the first WoO event since 2006 at Wayne County. A big crowd watched him duck underneath McCreadie for the lead with just three laps remaining.

“There at the beginning where we jumped up to fourth, and we kind of rode there for a little while, I was kind of like just holding my own with that tire,” said Lanigan, who extended his WoO points lead to 86 points over ninth-place finisher Rick Eckert of York, Pa. “Then once (the track) blackened up pretty good that tire came on.

“I knew (McCreadie) was a little softer on rubber and he was getting a little loose. I kind of knew right then that we had a shot at it.”

McCreadie might have been doomed by the lap-41 caution flag for Shane McLoughlin of Nashport, Ohio, who spun on the inside of the backstretch.

“I didn’t need the restart,” said McCreadie, who started third. “I think the restarts hurt me, but I don’t know what to say. We just got beat — it’s that simple. (Lanigan) did a helluva job. I tried to drive back around him going into (turn) three, but I just couldn’t stick out there.

“We’re running better, though — way better. It’s a far cry from how we’ve been all year. It took us two months to get good.”

The 50-year-old Frank, meanwhile, fell short of adding another Wayne County win to his resume. He won five touring-series events at the track from 1999-2006, including the track’s only previous WoO show in ’06.

“We just didn’t have anything for (Lanigan and McCreadie), but they were racing pretty hard so anything could happen,” said Frank, who reached third place when he passed Arthur on a lap-32 restart. “I was just trying to stay in contact with them in case they got together. If they opened up a hole, I would go for it.”

Finishing in positions 6-10 was fourth-starter Steve Shaver of Vienna, W.Va.; George Lee of Loudonville, Ohio, who drew loud cheers from his home crowd when he won a heat and drew the pole position but slipped to seventh in the final rundown; Ron Davies of Warren, Pa.; Eckert, who was never a factor after starting eighth; and 18th-starting Clint Smith of Senoia, Ga.

The race’s three caution flags were caused by minor incidents. In addition to McLoughlin’s problem on lap 41, Doug Drown of Wooster, Ohio, stopped in turn four on lap 21 and Gregg Satterlee spun between turns one and two on lap 32.

Notes: Lanigan’s Cornett-powered Rocket Chassis is sponsored by GottaRace.com, Performance Rod & Custom, Port City Racing and Xtreme Graphics. ... Twenty-three of 26 starters completed 50 laps. ... Lightning that danced across the sky during the main event signaled strong storms that threatened to the north, but the precipitation stayed away until the racing program was completed. ... The track was purchased last year by Joe McIlvaine and is promoted by the husband-and-wife team of Jason and Kristin Flory. ... Steve Casebolt of Richmond, Ind., made his first start of 2012, finishing 11th. ... Among drivers failing to make the feature: Donnie Moran (second-quickest qualifier), Cody Scott, Keith Berner, Tim Fuller, Russ King, Jon Henry, Dave Hornikel, Justin Chance, Brad Malcuit and Rick Bond. ... The WoO Memorial Day weekend tripleheader continues Saturday with the $25,000-to-win Jackpot 100 at Tyler County Speedway in Middlebourne, W.Va., and Sunday at I-77 Raceway Park in Ripley, W.Va.