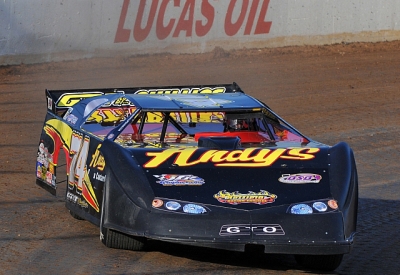 Early in the race, Jeremy Grady of Story City, Iowa, challenged the leader, but Grady faded as former MLRA champion Al Purkey of Coffeyville, Kan., moved up to second and put some pressure on Payne along with David Turner of Creighton, Mo. Turner slipped past Purkey and turned up the heat on Payne for several laps, but he couldn't overtake the winner, either. Purkey ended up second followed by Turner, Payne's teammate Terry Phillips and Will Vaught. Grady faded to finish 15th.

Notes: Payne's GRT Race Car is sponsored by Andy's Frozen Custard. ... Payne was coming off a $10,000 modified victory the previous weekend at Enid (Okla.) Speedway Park. ... Rusty Dukes, the 2003 MLRA rookie of the year, made one of his few starts with the series since 2004. ... Among drivers failing to make the feature: Chad Frewaldt, Larry Clawson, Aaron Seabaugh, Shad Badder, David Barker and Mark Voigt. ... The scheduled season opener at Midway Speedway in Lebanon, Mo., was rained out; no makeup date was immediately announced.