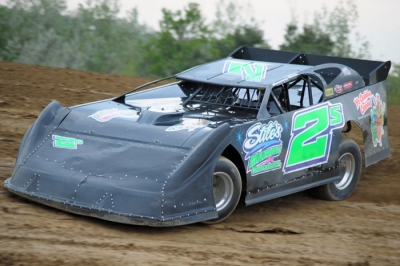 Sammy Stile has a pair of three-in-a-row streaks going at Pennsylvania tracks. (stivasonphotos.com)

Sammy Stile has won back-to-back Super Late Model features plenty of times during his career, but before this season he had never won three in a row. Now, he’s done that twice.

The 41-year-old Charleroi, Pa., driver has put together an impressive early-season run to rival that of any weekly racer in the country, winning the first three events of the season at both Marion Center (Pa.) Speedway and Dog Hollow Speedway in Strongstown, Pa. In all, Stile has finished in the top five in seven of eight starts this season.

“We’re rolling along real well,” said Stile, who debuted a new Rocket Chassis at the beginning of the year. “We got a new Rocket car with the orange front-end and it’s been great. The first night out I struggled a little bit in the heat race, but it was good come feature time that night and has been ever since. It’s definitely been one of the best streaks I’ve ever had here to start the year.”

While his domination of his two home tracks has definitely reached a new level so far this season, Stile has always found success at the two western Pennsylvania ovals. He’s won multiple championships at both speedways, including last year’s title at Dog Hollow, and in 2009 he became the first driver to win both tracks’ championships in the same season.

His ’09 campaign was quite profitable for Stile and then car owner Brian Laraway thanks to a $10,000 bonus offered by Marion Center and Dog Hollow to any driver sweeping both track championships that season. Combined with each track’s $3,000 championship paycheck, Stile earned a total of $16,000 for the two weekly racing titles.

Things have changed since Stile’s stellar two-championship season. He has since started his own racing program after parting ways with Laraway in 2010. The ‘11 season was a learning year for Stile as he adjusted to being both a driver and car owner, but now, as evident by his early-season success, Stile has his program in top form.

“I just got my own stuff in the last two years and driving for myself now, it’s been an adjustment and taken some time to get everything ironed out and working like I need it to,” said Stile, whose race car is powered by a Draime Racing Engine with sponsorship from McGrew Welding, Frontier Steel, American Racer Tires and Ohlins Shocks. “We’ve got it to where we’re pretty consistent and really getting things rolling along pretty well.”

While he may be an obvious favorite to win another pair of championships this season, Stile doesn’t plan to continue competing at Dog Hollow or Marion Center every week. He instead plans to travel to more regional special events later in the year, while also taking weeks off here and there to both focus on his company Stiles Marine and help his son Stefon get started racing in the Crate Late Model division.

“I’m really not interested in running every week like we used to do. I really want to venture out to some bigger races I’d really like to hit this year, and then some weeks just take some time off to do other things,” Stile said. “There’s a lot of things I want to do other than just me racing all the time. … I’ve got a son that I’ve got a Crate car for, but I haven’t put him in yet. And I could always focus on my business more. But it’s hard just to take a break when we’re running like we are.”

Stile is considering taking off from action Saturday at Marion Center, but he’ll look to extend his winning streak at Dog Hollow on Friday night. He’ll have his work cut out for him to make it four in a row, thanks to the track’s new rule that requires a driver winning three consecutive events to start from the tail of the field in the feature.

Even with the odds stacked against him, Stile still believes he has a shot at winning.

“I think it can be done, and I’m definitely up for the challenge,” said Stile, who’s started no better than 12th in claiming his previous two victories at Dog Hollow. “If I can avoid everything and get through and get some cautions when I need them, I think we’ll have a chance. I’ve been working hard this week and got the car ready. If we don’t make it four in a row, it won’t be from lack of effort.”

• Pulling off a Saturday night sweep, Brandon King of Decatur, Ala., won both the Super and Limited Late Model features May 19 at Moulton (Ala.) Speedway.

• Winning his third race in as many starts at Petaluma (Calif.) Speedway, Jeff Decker of Morgan Hill, Calif., stayed perfect in outrunning John Silva in the May 19 Late Model feature.

• Randy Korte of Highland, Ill., notched two weekend victories, earning $2,000 for a May 18 win at Belle-Clair Speedway in Belleville, Ill., and also winning May 19 at Federated Auto Parts I-55 Raceway in Pevely, Mo.

• Overcoming Dale Lingo IV, Mark Byram of Georgetown, Del., took the lead exiting turn four before the checkers May 19 at Delaware International Speedway in Delmar. “I was really surprised on that last lap,” Byram said. “I didn’t think there was anything on the outside, but I thought that I might as well try it.”

• Two-time IMCA champ Todd Cooney of Des Moines, Iowa, notched weekend victories, May 18 at his hometown Iowa State Fairgrounds Speedway and May 20 at Stuart (Iowa) Speedway, which hosted Late Models for the first time since the 1980s.

• Gene Ross of Lake Park, Ga., won May 19 at Needmore Speedway in Norman Park, Ga., a track that reopened after legal squabbles shuttered it last season.

• Mike Weeks of Friendsville, Tenn., had a two-victory weekend on May 18-19, winning Limited Late Model races at Boyd’s Speedway in Ringgold, Ga., and Wartburg (Tenn.) Speedway.

• Former UMP champ Rusty Schlenk of Weston, Ohio, doubled up with Ohio victories May 18-19 at Attica Raceway Park and Oakshade Raceway in Wauseon.

• In a battle of non-winners at Port Royal (Pa.) Speedway, Brett Schadel of Herndon, Pa., overtook Chad Hollenbeck in lapped traffic for his first Late Model victory at the half-mile oval.

• A recent graduate of the thunder sportsman division, Kenny Ramsey of Rock Hill, S.C., notched his first career Crate Late Model victory May 19 at Carolina Speedway near Gastonia, N.C. “It’s been a hard road switching over divisions, but I’m finally getting better at making the right car adjustments for the track and am feeling more comfortable,” Ramsey told the Gaston Gazette. He also moved into the points lead of the track’s NDRA-sanctioned division.

• Cody Buterbaugh of Conestoga, Pa., won May 18 at Bedford (Pa.) Speedway to capture his first-ever victory in the Semi-Late division.

• Gregg Haskell of Chatham, Ontario, rebounded from a first-lap spin May 19 at South Buxton (Ontario) Raceway for his first feature victory in the division. “It’s amazing, to finally actually get one, to know that I can do this,” Haskell said.

• Grabbing his first Crate Late Model victory in his fifth season in the division Bobby Whitling of Franklin, Pa., led all the way for a Fastrak-sanctioned triumph at Sharon Speedway in Hartford, Ohio. “We’ve been working so hard for years trying to get these cars fast and it’s been so frustrating,” said the 39-year-old Whitling, an 82-race winner in the stock car division. "This was by far the hardest race for me to win over my career.”

AMRA: Reigning champion Chris Garnes of Evans, W.Va., used a victory and runner-up finish over the weekend to extend his points lead to more than 100 points over Ronnie Mayle of Chesterville, Ohio. Andy Bond of Coolville, Ohio, is third with Freddie Carpenter of Parkersburg, W.Va., fourth and Bob Adams Jr. of Racine, Ohio, fifth.

ULMA: Jason Russell of Henley, Mo., continues to lead the standings after a pair of fifth-place finishes over the past weekend. Brandon Imhoff of Lake Ozark, who has one less start than Russell on the season, remains second while Chris Cox of Springfield, is third with Chris Hawkins of Neosho, Mo., and Brett Wood of Warrensburg, rounding out the current top five.

NeSmith: Tony Lawson of Laurel, Miss., continues to lead the chase for the $10,000 Crate Late Model championship after a runner-up Saturday at Talladega Short Track in Eastaboga, Ala., earning another 25 bonus points for his fourth consecutive week of series competition. Lawson, who has now earned the maximum 100 bonus points, holds a 14-point lead over Shannon Lee of Lumberton, Miss., who picked up his third victory of the season Saturday at Jackson Motor Speedway in Byram, Miss. Brent Barrett of Cleveland, Miss., has moved to third in the standings after finishes of third and second over the weekend.

IMCA: Nate Beuseling of Silvis, Ill., leads the standings as of May 17, with an 11-point advantage over reigning champion Ray Guss Jr. of Milan, Ill. Tyler Bruening of Decorah, Iowa, is third with Matt Ryan of Davenport Iowa, fourth and Mike Murphy Jr. of Colona, Ill., fifth.

Among non-touring and independent special events Memorial Day weekend at dirt tracks around the country:

Ponderosa Speedway, Junction City, Ky. (May 25): The $2,000-to-win special includes a chance at a $600 bonus if a driver can sweep the Kentucky weekend at Ponderosa, Richmond and Lake Cumberland.

Little Valley (N.Y.) Speedway (May 27): The track’s season opener features a $3,000-to-win Super Late Model event along with a $1,000-to-win event for BRP Can Am Series Limited Late Models.

Harris (N.C.) Speedway (May 28): The track is skipping its regular Saturday event for a Monday special for Fastrak-rules Crate Late Models paying $2,000-to-win.