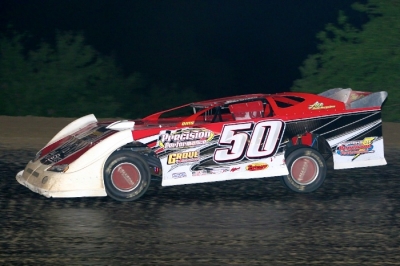 Eckrich caught brother Andy on the 15th of 50 laps and led to the finish of a fast-paced IMCA Late Model feature that ran green all the way. The victory paid $2,000. | Slideshow

After pulling even on the white flag lap, Andy Eckrich of Oxford, Iowa, had to settle for a close second. Jeff Aikey of Waterloo, Iowa,; Tyler Bruening of Decorah, Iowa; and tour point leader Mike Murphy Jr. of Colona, Ill., rounded out the top five.

Andy Eckrich started outside Bryan Klein on the front row, took the lead at the start and was pulling away from the field before encountering lapped traffic on the eighth circuit.

That gave Denny Eckrich the opportunity to make up the distance. He passed Andy seven laps later, then held off late challenges for his Deery career first win. Murphy moved up seven spots from his spot on the starting grid to crack the top five.

Notes: Eckrich’s Barry Wright Race Car is sponsored by Precision Performance, Grove Automotive, Mac Tools and Ace Auto Recyclers. ... Joining brother Andy as a series winner, the Eckriches are the second brother combination to have won series events; Joe, Steve and Ed Kosiski of Omaha, Neb., all own series victories. ... Kurt Kile of Nichols, Iowa, earned hard charger honors with his 17th-to-seventh run. ... Curt Martin of Independence, Iowa, and Jeff Mitrisin of Oskaloosa, Iowa, got upside in separate wrecks in the consolation race; both were OK. ... Next up on the Deery Series schedule is the Memorial Day show at Boone (Iowa) Speedway on May 28. Pit gates open at 2 p.m., the grandstand opens at 3 p.m., hot laps are at 4 p.m. and racing starts at 5 p.m.