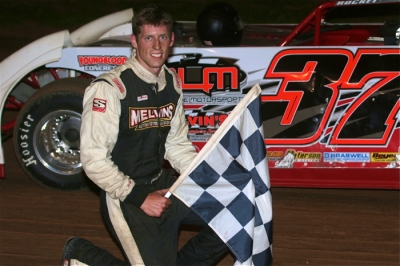 ST. CLAIRSVILLE, Ohio (May 20) — One night after his younger brother Jacob stole the spotlight with a career-best victory at Tyler County Speedway, Jared Hawkins of Fairmont, W.Va., made his own headlines Sunday at Cannonball Motor Speedway.

The older Hawkins brother, who finished fifth Saturday night at Tyler County, made the most of Cannonball’s season-opening event, grabbing a $3,000 victory in the first round of the 3/8-mile oval’s Sunday Shootout Series. | Slideshow

Eddie Carrier Jr. of Salt Rock, W.Va., blasted off the front row in the unsanctioned 35-lap feature for topless Super Late Models and initially appeared capable of running away for the win.

By the time Jared Hawkins was able to extricate himself from a tough battle with Corey Conley of Wellsburg, W.Va., for second, Carrier had built a massive lead. Hawkins immediately started whittling away at the advantage, closing to within two car lengths when Carrier's engine went up in a plume of smoke at the race’s midpoint.

After restarting with the lead on lap 18, Hawkins shortly began to feel pressure from sixth-starting Donnie Moran of Dresden, Ohio, who moved to the second position on lap 20.

Moran was at Hawkins’ bumper with for circuits remaining, but Hawkins never provided the opening that Moran needed and powered across the finish line, completing a sweep for the Hawkins brothers in the weekend’s topless doubleheader at the two Ohio Valley ovals promoted by Circle Track Management Group.

Moran settled for the runner-up finish with Conley holding the third position at the line. Jared Miley of South Park, Pa., finished fourth after starting 13th with Sammy Stile of Charleroi, Pa., rounding out the top five.